Gulf of Guinea Piracy and Illegal Fishing: Expensive Crimes for the Neighborhood 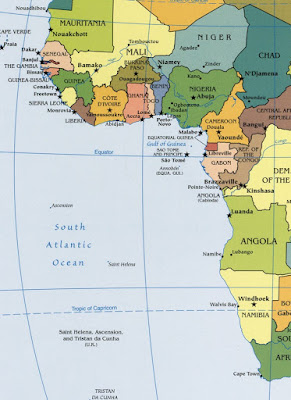 
The Chief of Naval Staff, Rear Admiral Ibok Ekwe Ibas, has revealed that Nigeria and 15 other countries in the Gulf of Guinea are currently losing a sum of $2 billion to pirate attacks annually.

The Naval Chief’s revelation was coming two months after Nigeria was rated as number one in pirate attacks in the Gulf of Guinea in a report by the International Maritime Bureau (IMB).


Nigeria is losing $600 million annually to illegal and unreported fishing by foreign vessels as a result of lack of equipment such as Automatic Identification System (AIS) and Vessel Monitoring System (VMS), and adequate manpower to police the country’s vast coastline, THISDAY’s investigation has revealed.

THISDAY gathered that the country also spends $800 million annually on fish importation, being the fourth largest importer of fish in the world, after China, Japan and the United States.
***
The document titled, “Fisheries Crime Activities in West Africa Coastal Region,” showed that Nigeria spends about $800 million (N324 billion) to import fish to bridge the supply gap.

According to the document, Nigeria in 2018 imported fish worth $71 million, $56 million, $43 million and $174 million from Iceland, Russia, Norway and Netherlands respectively.

The document also showed that West Africa remains a global hotspot for illegal fishing with estimated losses of $2.9 billion.

The document further revealed that over 450 Chinese vessels fish illegally in Nigeria and the coast of West Africa, adding that, “a survey carried out by the West Africa Task Force showed that over 37 per cent of all fish caught in West Africa are caught illegally with China, Taiwan, Russia, South Korea, Spain, France and Thailand being the main countries responsible.

“This is aside vessels from other countries and artisanal fishing in Nigeria inland water ways in areas such as Badore, Epe and coastal areas in Bayelsa, Akwa Ibom and Cross Rivers states.”

Nigeria reports it has a project to deal with these issues, Deep Blue Project:


There is hope in the horizon for the high level of insecurity in Nigeria’s waterways as the Nigerian Maritime Administration and Safety Agency (NIMASA), has established the Integrated Security and Waterways Protection Infrastructure known as Deep Blue Project to drastically reduce criminalities in the Gulf of Guinea.
***
He said, “The Deep Blue Project is a multi-pronged approach towards tackling insecurity in our territorial waters and the entire Gulf of Guinea. What we are doing is fulfilling the training aspect of the project and this will also be complemented by acquisition of assets, such as fast intervention vessels, surveillance aircraft, and other facilities, including a command and control centre for data collection and information sharing that will aid our goals of targeted enforcement.”

Wishing them the best of luck with that. The GOG is a huge area.