Pacific Gas and Electric Company, the California power giant, said early this morning that it has begun shutting off power to almost 800,000 customers in a bid to prevent fires when strong winds arrive.

Why it matters: Via the San Francisco Chronicle, "For PG&E, the shut-offs will mark a high-stakes test of a program the now-bankrupt company developed after being implicated in two years of catastrophic infernos."

The paper calls it the company's "biggest preemptive action to avert another destructive wildfire like those which took dozens of lives and destroyed thousands of homes over the past two years."

According to the San Francisco Chronicle:


The outages could last into next week, affect more than 2 million people and, by some estimates, cost businesses and residents more than $1 billion.

So why is this happening? Well, for one thing, you have a company forced into bankruptcy by the disastrous fires of the past and the heavy costs incurred as a result. They might be a little gun shy, you think?

Further, due to the distances from some of the sources of electricity, power lines run through forested areas. If power plants were located closer to major population centers, the need for lengthy power line runs would be lessened. As you may determine from the below, however, California has only one operating nuclear power plant,


The Diablo Canyon Power Plant is an electricity-generating nuclear power plant near Avila Beach in San Luis Obispo County, California. Since the permanent shutdown of the San Onofre Nuclear Generating Station in 2013, Diablo Canyon is the only operational nuclear plant left in the state.

Here's a map of the major power lines in California, with the red lines being those of PG&E:

What is producing that electricity? 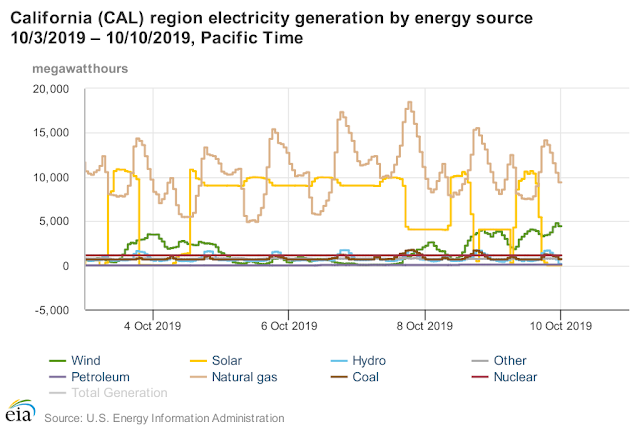 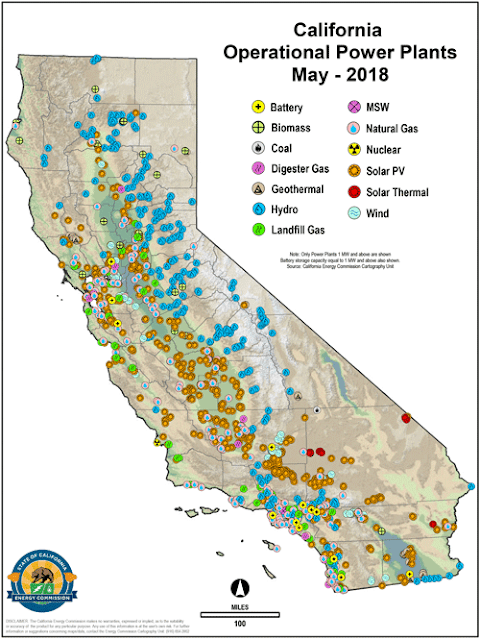 And the amount of energy California gets from its neighbors (negative numbers means imported into California): 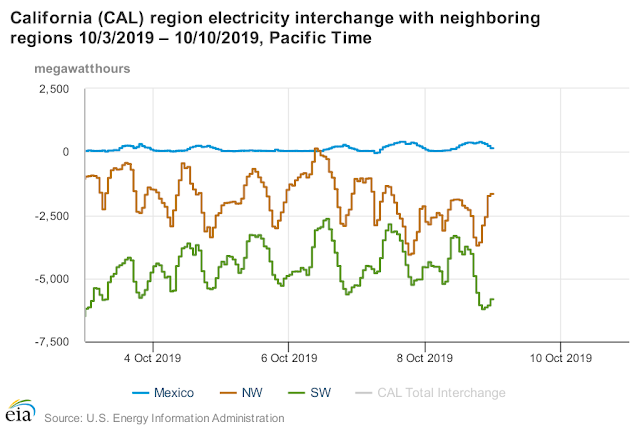 
To protect public safety, PG&E has turned off power due to gusty winds and dry conditions combined with a heightened fire risk. Once the weather subsides and it is safe to do so, PG&E crews will begin patrolling power lines, repairing damaged equipment and restoring customers.

As you may recall from Forbes:


Yet, beyond power rates 45% above the U.S. average, California has another problem that makes it less of a model than some proclaim. California now imports 33% of its electricity supply from fast growing neighbors, with about 65% of that coming from the Southwest and 35% coming from the Northwest. These numbers increase most in summer months when air conditioning loads peak. Imports have been rising rapidly: in 2010, California "only" imported 25% of its power.

Besides having the most expensive electricity west of the Mississippi River in the continental U.S., California already has the least reliable electricity. California easily leads the nation with nearly 470 power outages a year, compared to 160 for second place Texas, which is really amazing because Texas produces 125% MORE electricity! (here). California's reliability problems will be multiplied as more wind and solar enter the power mix, intermittent resources located in remote areas that cannot be so easily transported to cities via the grid. (emphasis added)

SO, you kill the most reliable,most environmentally friendly power plants - nuclear. You add in intermittent sources, the need to bring in power from outside the state, you rely on hydro power locations that are in the mountains and far from the cities, and you'll be the current mess.

Email ThisBlogThis!Share to TwitterShare to FacebookShare to Pinterest
Labels: Electricity