In the the South Pacific: China Moves on the Solomons

From the Australian Strategic Policy Institute and Alan Tidwell, The Tulagi turning point


The New York Times reported on 16 October that the People’s Republic of China had leased the island of Tulagi from Solomon Islands. A secret deal was apparently struck in September, no doubt around the time Prime Minister Manasseh Sogavare ascended to his leadership role and Solomon Islands announced its switch from recognising Taipei to Beijing. Tulagi is remembered mostly as the place where the pivotal Allied campaign for Guadalcanal started in World War II. With the leasing of the island, we may well have a shift in the strategic competition in the Pacific.

Long-term access to Tulagi will provide Beijing with a base for commercial or military activity. For example, it may make managing regional Chinese fishing fleets easier. Fishing, however, is the least of the worries for the West. How long will it be before Tulagi begins to take on features like those found on the faux-island bases in the South China Sea? Will China build an airfield on Tulagi? China’s J-10 fighter aircraft could use Tulagi, as they’ve done in the Paracel Islands, which arguably brings the coast of Queensland into range. (It’s worth noting, though, that while a J-10 could reach the Queensland coast, it wouldn’t have any time on target without refuelling.)

Tulagi also extends Beijing’s political influence. Cementing Chinese operations there could give China far greater reach in Solomon Islands and the Southwest Pacific. If Beijing manages the leasing agreement well, it will serve as a proof of concept for other Pacific island countries. Leasing an island may become financially very attractive to Pacific island elites. If that’s the case, then Tulagi is the thin end of the wedge. How long will be it before Chuuk in the Federated States of Micronesia votes for independence and pursues a similar leasing arrangement?

Some of you will remember Tulagi from World War II as a small island near Guadalcanal that provides access to major shipping lanes to Australia and New Zealand from Hawaii and the mainland United States. You might note that a major Chinese base in the Solomons would be south east of the major U.S. territory of Guam, a vital site for American naval and air assets.

Japan moved into the area in area in WWII, before the U.S. halted their advances at Guadalcanal and, incidentally, Tulagi. Here's a map of the Japanese Greater East Asia Co-Prosperity Sphere, 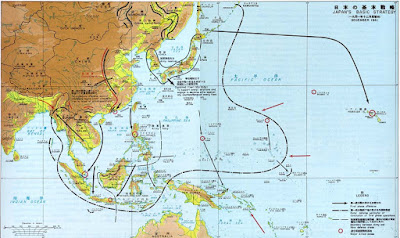 The Greater East Asia Co-Prosperity Sphere (大東亜共栄圏 Dai-tō-a Kyōeiken) was an imperial concept created and promulgated for occupied Asian populations during the first third of the Shōwa period by the government and military of the Empire of Japan. It promoted the cultural and economic unity of the East Asian race. It also declared the intention to create a self-sufficient "bloc of Asian nations led by the Japanese and free of Western powers". It was announced in a radio address entitled "The International Situation and Japan's Position" by Foreign Minister Hachirō Arita on June 29, 1940.[1]

An Investigation of Global Policy with the Yamato Race as Nucleus — a secret document completed in 1943 for high-ranking government use — laid out the superior position of Japan in the Greater Asia Co-Prosperity Sphere, showing the subordination of other nations was not forced by the war but part of explicit policy.[2] It explicitly states the superiority of the Japanese over other Asian races and provides evidence that the Sphere was inherently hierarchical, including Japan's true intention of domination over Asia

Substitute China for Japan in the above paragraphs for a look at how China seeks to dominate the Western Pacific and South China Seas. Japan had the advantage that following WWI it gained governance rights over former German territories in the Pacific, including what are now Palau, the Northern Marianas, and the Marshall Islands as part of the "South Pacific Mandate" (see here).


All this being prelude to the bit Ms. Glaser points to in this innocuously titled article,
US spy planes kept eye on Chinese scientists during research expedition near Guam


Xu Kuidong, a lead researcher with the mission who is affiliated with the Institute of Oceanology, Chinese Academy of Sciences in Qingdao, Shandong, said the scientists on board were “well aware” of the area’s sensitivity.

“It is all about the Second Island Chain,” he said, referring to a series of archipelagos that stretches from the eastern coast of Japan to the Bonin islands, to the Mariana islands, to Guam and the island country of Palau.
The US-controlled islands initially served as a second line of defence against communist countries in East Asia during the cold war. Today they are regarded as a major constraint on China’s rapidly expanding marine power and influence in the Pacific Ocean.
***
The team’s findings would be shared with the Chinese military and other interest groups in government, Xu said.
***
“There are many efforts going on to breach the Second Island Chain, this is part of them,” he said.
***
According to Tom Matelski, a US Army War College Fellow at the Daniel K. Inouye Asia Pacific Centre for Security Studies in Hawaii, China was seeking to build a military base in Micronesia.
Micronesia, with a population of about 110,000, has received a large amount of aid and investment from China since 2003. The money helped build some of the nation’s largest farms, schools, bridges and power plants, as well as the residence for the president and other senior government officials.
Since Micronesia lacked its own military, it had “outsourced” its defence to the US since the end of the second world war. But in 2015 Micronesian lawmakers introduced a resolution to end the exclusive partnership with the US as early as 2018.

If the Chinese military got a foothold on a Micronesian island, “the US could potentially lose their access to the strategic lines of communication that connect the Pacific Ocean to the vital traffic of the East and South China Seas”, Matelski wrote in an article published on the website of The Diplomat magazine in February last year.
Possession of portions of the Second Island Chain would give China a “springboard against foreign force projection,” he said. (emphasis added)

So, China - currently through obstensibly peaceful means - seeks to do what the Japanese tried to do before the start of WWII - developing bases on trade routes, expanding their presence, developing what amounts to a clone of the Japanese Greater East Asia Co-Prosperity Sphere