DARPA's Gremlins program has completed the first flight test of its X-61A vehicle. The 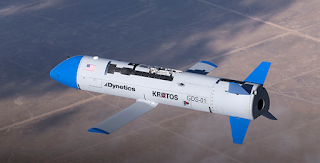 test in late November at the U.S. Army’s Dugway Proving Ground in Utah included one captive-carry mission aboard a C-130A and an airborne launch and free flight lasting just over an hour-and-a-half.

The goal for this third phase of the Gremlins program is completion of a full-scale technology demonstration series featuring the air recovery of multiple, low-cost, reusable unmanned aerial systems (UASs), or “Gremlins.” Safety, reliability, and affordability are the key objectives for the system, which would launch groups of UASs from multiple types of military aircraft while out of range from adversary defenses. Once Gremlins complete their mission, the transport aircraft would retrieve them in the air and carry them home, where ground crews would prepare them for their next use within 24 hours.

The team met all objectives of the test in November, including gathering data on operation and performance, air and ground-based command and control systems, and flight termination. A parachute anomaly occurred in a recovery sequence that is specific to the test series and not part of the operational plan. The incident resulted in the loss of the test vehicle, one of five in the program. Four vehicles remain operational and available for the test series, which will continue in 2020.

"The vehicle performed well, giving us confidence we are on the right path and can expect success in our follow-on efforts," said Scott Wierzbanowski, the program manager for Gremlins in DARPA's Tactical Technology Office. "We got a closer look at vehicle performance for launch, rate capture, engine start, and transition to free flight. We had simulated the performance on the ground, and have now fully tested them in the air. We also demonstrated a variety of vehicle maneuvers that helped validate our aerodynamic data."

What is the Gremlin Program?


Now do a ship launched version. Perhaps from an unmanned surface vessel or (gasp!) a submersible/semi-submersible.
Posted by Mark Tempest at 1/29/2020 07:30:00 AM