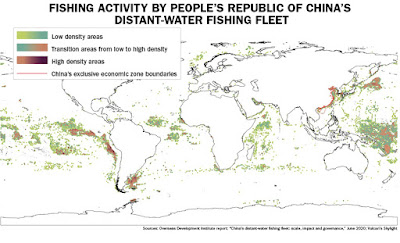 The People’s Republic of China’s (PRC’s) distant-water fishing fleet continues to harm developing countries through the loss of billions of dollars in revenues and by contributing to unsustainable levels of illegal, unreported and unregulated (IUU) fishing, all of which threaten the livelihoods and food security of legitimate fishers and communities, according to a series of reports released in the past year. Having exhausted much of its fish stocks in domestic waters, the PRC has amassed the world’s largest distant-water fleet with close to 17,000 vessels, five to eight times more than previously documented, according to the Overseas Development Institute (ODI), an independent global think tank.

The repory of ODI can be found here. Highlights: