Once Again, Chokepoints, SLOCs, the Importance of Navies

First off, what is a "chokepoint?" There is very nice definition by John Daly here:

Ever since men first put to sea, conflicts have swirled around narrow maritime passages known as choke points. A subset of the broader category of Sea Lines of Communication (SLOCs), maritime choke points act as funnels drawing in shipping from surrounding seas. As critical pressure points in naval struggles for "command of the sea," every navy seeks to secure them while denying their use to the enemy.

I keep posting about sea lanes. What are these things? Sea lanes are trade routes - almost like highways in the sea, where due to geography, ocean going vessels follow certain paths to avoid islands, shallows and other impediments to their travel. They are also generally the most efficient routes to get from Point A to Point B - as close to straight line travel as a ship can accomplish given the number of obstacles in its path. 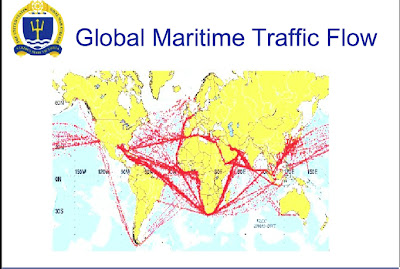 Over 16 years ago,  I first discussed the importance of "chokepoints" on this blog.  During that period, we have seen the effects of pirates and nations interdicting ships headed to and from key chokepoints leading to and from the Indian Ocean, in the Straits of Malacca and Hormuz.

After the recent ship grounding in the Suez Canal which is, after all,  both a very long "chokepoint" and a SLOC, some people seem to have finally taken note that there is a world-wide system of movement of trade goods and vital energy cargo that takes place on the oceans and seas of the world.

If they had been paying attention, they could have referred to the U.S. Energy Information Agency and its World Oil Transit Chokepoints Analysis Brief from whence comes the below illustration:

In 1996, the U.S. National Defense University published Chokepoints: Maritime Economic Concerns in Southeast Asia which I have added below. While the data contained therein is no longer valid, and probably hugely understated given the growth of the economies of the countries of Asia, the concerns expressed are not outdated, and, like the data, probably understated.

Strategic Chokepoints of So... by lawofsea

How do we keep these vital SLOCs and chokepoints open? We have navies and coast guards that patrol the seas to thwart pirates and sea robbers. We worry about the effects of local rebel or national forces who occupy territory adjacent to chokepoints who might do damage to ships as they transit them, as we see with the Houti rebels in Yemen or the forces of countries like Iran. Remember the attempted attack on a U.S. Navy destroyer in 2016?

A U.S. Navy guided missile destroyer was targeted on Sunday in a failed missile attack from territory in Yemen controlled by Iran-aligned Houthi rebels, a U.S. military spokesman told Reuters, saying neither of the two missiles hit the ship. ***

The attempted strike on the USS Mason, which was first reported by Reuters, came just a week after a United Arab Emirates vessel came under attack from Houthis and suggests growing risks to the U.S. military from Yemen’s conflict.

Last week’s attack on the UAE vessel also took place around the Bab al-Mandab strait, in what the UAE branded an “act of terrorism.”

In 2013, more than 3.4 million barrels of oil passed through the 20 km (12 mile)-wide Bab al-Mandab each day, the U.S. Energy Information Administration says.

It was unclear what actions the U.S. military might take, but Davis stressed a commitment to defend freedom of navigation and protect U.S. forces.

"Defend fredom of navigation." Exactly. And which is why we need a large and strong Navy.