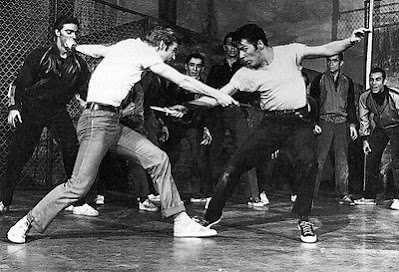 Charles C.W. Cooke at National Review has a little fun with current events in his In Defense of Teenage Knife Fighting

Is there any tradition that the radicals won’t ruin? As the brilliant Bree Newsome pointed out on Twitter, “Teenagers have been having fights including fights involving knives for eons.” And now people are calling the cops on them? I ask: Is this a self-governing country or not? When Newsome says, “We do not need police to address these situations by showing up to the scene & using a weapon,” she may be expressing a view that is unfashionable these days. But she’s right.

Disappointingly, my colleague Phil Klein has felt compelled to join the critics. In a post published yesterday, Phil asked in a sarcastic tone whether the police should “somehow treat teenage knife fights as they would harmless roughhousing and simply ignore it.” My answer to this is: Yes, that’s exactly what they should do — yes, even if they are explicitly called to the scene. I don’t know where Phil grew up, but where I spent my childhood, Fridays were idyllic: We’d play some football, try a little Super Mario Bros, have a quick knife fight, and then fire up some frozen pizza before bed. And now law enforcement is getting involved? This is political correctness gone mad.

Wile Mr. Cooke was being funny, it does remind me of the fact that once upon a time in our world, single combat was a method of settling differences, without law enforcement being involved. As set out in this PBS article, The History of Dueling in America

...By 1804, dueling had become an American fixture. And for another thirty years or more, its popularity would continue to grow.

Like many early American customs, dueling was imported. Starting in the Middle Ages, European nobles had defended their honor in man-to-man battles. An early version of dueling was known as "judicial combat," so called because God allegedly judged the man in the right and let him win. In an era known for its bloody encounters, judicial combats probably prevented men from killing in the heat of passion. Still, numerous authorities, including heads of state and the Catholic Church, banned dueling -- with little effect.

In 1777, a group of Irishmen codified dueling practices in a document called the Code Duello. The Code contained 26 specific rules outlining all aspects of the duel, from the time of day during which challenges could be received to the number of shots or wounds required for satisfaction of honor. An Americanized version of the Code, written by South Carolina Governor John Lyde Wilson, appeared in 1838. Prior to that, Americans made do with European rules.

In a typical duel, each party acted through a second. The seconds' duty, above all, was to try to reconcile the parties without violence. An offended party sent a challenge through his second. If the recipient apologized, the matter usually ended. If he elected to fight, the recipient chose the weapons and the time and place of the encounter. Up until combat began, apologies could be given and the duel stopped. After combat began, it could be stopped at any point after honor had been satisfied.

Edward Doty and Edward Lester, of the Massachusetts colony, fought the first recorded American duel in 1621, just a year after the Pilgrims arrived at Plymouth. Armed with swords, both men sustained minor wounds. A unique aspect of this duel was that Doty and Leicester were servants. For the most part, only gentlemen dueled.

In America, duels were fought by men from all walks of life. But many of America's most important citizens defended their honor on the dueling grounds. Button Gwinnet, who had signed the Declaration of Independence, was shot down by General Lachlan McIntosh in a duel. Commodore Stephen Decatur of the United States Navy, an experienced duelist, died at the hands of another commodore, James Barron. And Abraham Lincoln narrowly averted a battle with swords by apologizing to an Illinois state official he had ridiculed in a local newspaper.

Well, we may need to bring back duelliing. And forget that part about "only gentlemen duelled" - it should be open to all regardless of gender, creed, race, sexual identity, and national origin.

In fact, we ought to shame all those who seek to settle differences by "drive by" shootings by declaring them to be cowardly scum and point out that if they were brave enough nothing should prevent them from dropping a gauntlet on their foe and seeking redress on the duelling grounds. While I don't know what drove the young woman in Columbus to attempt to knife fight, it would have been better had she declared her concerns and challenged her opponents to a duel, with a choice of weapons.

It seems to me that such duels, properly seconded and attended by medical personnel, would greatly simplify policing and reduce the threat to innocent parties.