Interesting stuff from Lockheed Martin Harnessing the Power of Lasers

Our technology today is ready to defend against small rockets, artillery shells and mortars, small unmanned aerial vehicles, small attack boats and lightweight ground vehicles that are approximately a mile way. As fiber laser power levels increase, our systems will be able to disable larger threats and do so across greater distances. When operated in conjunction with kinetic energy systems, these systems can serve as a force multiplier. 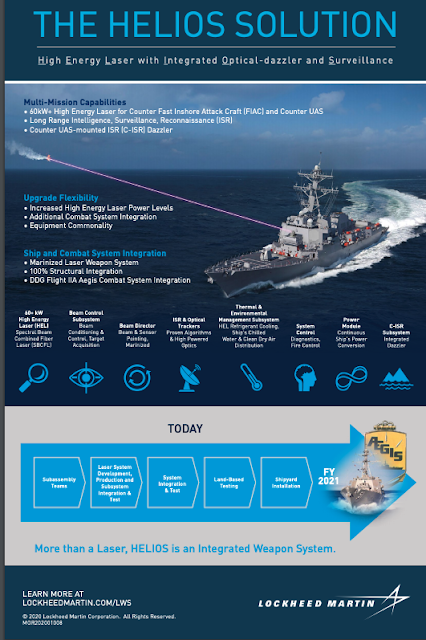 Vice Admiral Ron Boxall says the funding is already in place for HELIOS installation on board a Flight IIA ship.

Lockheed Martin’s Integrated Warfare Sensor Systems developed the HELIOS under a $150 million contract awarded in January 2018 for one system for ship installation and a second for land-based testing. The award includes options for 14 more.

Joe Ottaviano, the company’s business development director, says the system went through critical design review and factory qualification testing last year. It was delivered to a Navy test site in December. He says it already has been integrated with the Aegis combat system in various configurations for the different destroyer flights.

For years, the Navy has researched lasers and other directed-energy weapons (such as microwave and particle-beam systems) to advance ship defense against surface craft, aircraft, antiship missiles, and unmanned vehicles. A laser, drawing power from the ship service power system, has an “endless magazine” that Ottaviano says “never runs out of bullets.”

The Navy wants a 60-kilowatt (kW) shipboard solid-state laser that could be increased up to 150 kW. Subsequent increments will ramp up power even further. The Navy’s Fiscal Year 2021 budget request says the system “provides a low cost-per-shot capability” for antisurface warfare; to destroy unmanned aerial systems and fast inshore attack craft; and for intelligence, surveillance, and reconnaissance, thanks to its integrated optics.

The development is part of the Navy’s Laser Family of Systems program, which includes two other initiatives: the solid-state laser technology maturation (SSL-TM) program, an Office of Naval Research (ONR) effort, and an optical dazzling interdictor known as ODIN.

More on the SSL-TM program here:

The Navy Is Arming Attack Submarines With High Energy Lasers

The development is part of the Navy’s Laser Family of Systems program, which includes two other initiatives: the solid-state laser technology maturation (SSL-TM) program, an Office of Naval Research (ONR) effort, and an optical dazzling interdictor known as ODIN.

The U.S. Navy's Virginia Class attack submarines are formidable weapons platforms. They carry advanced-capability (ADCAP) torpedoes and Tomahawk land-attack cruise missiles. But apparently this is not enough. They are to be the first subs in the world armed with a powerful laser as well.

Documents suggest that the High Energy Laser (HEL) could be incredibly powerful, around 300 kilowatts. And eventually be up to 500 kilowatts. The power will come from the submarine’s nuclear reactor which has a capacity of 30 megawatts. And there are indications that it may already have been tested using a towed power generator instead.

***It is unclear why the Navy wants to fit a laser to submarines. One of the possible uses will be as a last ditch defense against aircraft such as drones and anti-submarine helicopters.***