Love it or hate it, preserving the INSURV process is important 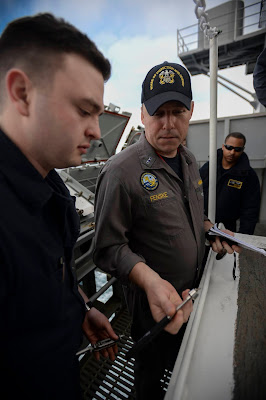 “INSURV gives us a snapshot of the material condition of our fleet, and a thorough one at that. It’s not the most popular program on the deck-plate; from the most junior enlisted to the most senior officer, it is a dreaded inspection, but a necessary one. It ensures that every submarine that submerges, surfaces; every warship that deploys, returns home,” Wittman said in a news release.

While the reports have long caused headaches for the Navy, as inspections leading to sub-par results have reflected poorly on the service and its ships, HASC lawmakers have told USNI News the assessments are essential for understanding the state of the service’s ships.

“I think that the transparency is really important, and I also think that the report should not be classified,” Rep. Elaine Luria (D-Va.), a former Navy nuclear-qualified surface warfare officer who is now the vice chair of HASC, told USNI News last month. “I think that the taxpayers need to understand how the Navy’s being maintained, how their tax dollars are being used and what the readiness of our Navy is for our national defense.”

Chief Warrant Officer 4 Greg Fenske and a member of the Board of Inspection and Survey (INSURV) team inspect parts from an ordnance jettison locker aboard the aircraft carrier USS Nimitz (CVN 68). The ship is undergoing INSURV in preparation for an upcoming deployment. (U.S. Navy photo by Mass Communication Specialist 3rd Class Colby S. Comery/Released)