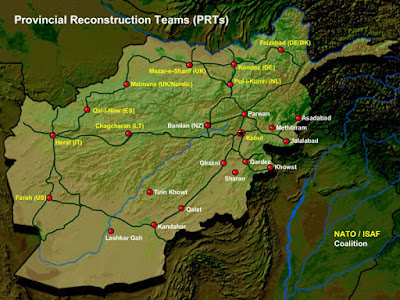 Please join us at 5pm on 17 October 2021 for Midrats Episode 605: The Navy in Afghanistan at Flood Tide - PRT Khost

Afghanistan is a landlocked nation, but in the USA’s two-decade presence in that country, her Navy was there from the beginning to end serving along with her sister services.

Many are familiar with the untold number of Individual Augmentation (IA) assignments Navy active duty and reserve component personnel filled, Navy Corpsmen serving with USMC units, and even SeaBee deployments to Afghanistan, but there were other units with a large US Navy presence, a few of the Provincial Reconstruction Teams (PRT).

This Sunday we’re going to take a snapshot of this part of the Afghanistan conflict from its high-water mark - 2010 and 2011 - with our guests Captain Steve Deal, USN (Ret.) and Command Sergeant Major Alexander Barnett, USA (Ret.). They served together as the Commanding Officer and Sergeant Major of Provincial Reconstruction Team Khost in 2010 through 2011.

Captain Deal had extensive experience in command. In addition to his tour as Commanding Officer, PRT Khost, he commanded Patrol Squadron 47 in Ali AB, Iraq (2007-2008) and Patrol and Reconnaissance Wing TEN in Whidbey Island, WA (2012-2013).

Email ThisBlogThis!Share to TwitterShare to FacebookShare to Pinterest
Labels: MI, Midrats on Apple Podcasts, Midrats on Blogtalkradio, Midrats on Spotify