Most Americans don't have knowledge of the 1950's Korean War or its background.

Few know that Japan annexed Korea starting in 1910 after a 1905 treaty which made Korea a protectorate of Japan.

At the end of WWII, Soviet Russia gained control of what is North Korea and American forces took over South 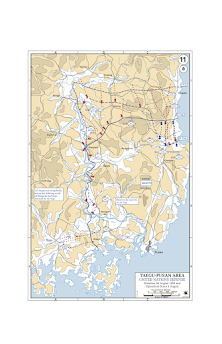 Korea, with the 38th parallel being the dividing line.

On June 25, 1950, North Korean forces invaded South Korea and drove very deep into South Korea, by early August only leaving what became known as the "Pusan Perimeter" in U.S. and South Korean hands.

In order to relieve the pressure on the Pusan Perimeter in early September 1950, General MacArthur, acting as UN Command, organized an successful amphibious assault on Inchon ("Operation Chromite"), "110 miles behind enemy lines" (see here) in one of the most amazing feat of arms ever accomplished.

The success of MacArthur's plan was reliant on a strong and coordinated sea, air, and land force. The Inchon invasion demonstrated how naval forces can be a decisive factor in littoral operations. The 230 ships of Vice Admiral Arthur D. Struble's Joint Task Force (JTF) 7, with the aid of Royal Navy and other Allied warships, established superiority in the Yellow Sea as well as the air over it. The continued presence of U.S. and Allied naval forces acted as a deterrent to Soviet and/or Chinese intervention. The element of surprise was essential to Operation Chromite.

By 19 September, the Marines had captured Kimpo air base, into which flowed Marine close support aircraft and U.S. Air Force supply transports. U.S. Army troops advanced from the beachhead and linked up with their comrades advancing north from the Pusan perimeter. Marine, Army, and South Korean troops captured Seoul on 28 September 1950.

Another phase of the war began in October 1950, with a planned amphibious assault at Wonsan on North Korea's east coast which left the U.S. Navy and its allies with a valuable lesson as set out below:

The great success of the Inchon Invasion led General MacArthur to order a second amphibious assault, targeting Wonsan on North Korea's east coast. After landing there, Tenth Corps could advance inland, link up with the Eighth Army moving north from Seoul and hasten the destruction of the North Korean army. Wonsan would also provide UN forces with another logistics support seaport, one closer to the battlefronts than Pusan and with greater handling capacity than tide-encumbered Inchon.

Since the enemy army's coherence collapsed much more rapidly than expected, by the Wonsan operation's planned execution date of 20 October 1950, its immediate strategic goals had been overtaken by events. However, the forces landed there proved valuable in the push up North Korea's east side, and the captured port did fulfill its intended mission.

Wonsan's greatest value, though, was unintended: it gave the U.S. Navy a painfully valuable reminder of the fruits of neglecting mine countermeasures, that unglamorous side of maritime power that, when it is needed, is needed very badly. As Admiral Forrest Sherman, the Chief of Naval Operations at the time, remarked "when you can't go where you want to, when you want to, you haven't got command of the sea". This experience provoked one of the greatest minesweeper building programs in the Navy's history, one that produced hundreds of ships to serve not only under the U.S. flag, but under those of many allied nations. (emphasis added)

At the time, the lesson was painfully learned by the damage to or loss of ships. Not all damage was caused by mines - the risk of inshore operation from gun batteries has been well known for hundreds of years, but it came back in 1950.

From the Naval Heritage and History Command this partial list of Ships Sunk and Damaged in Action during the Korean Conflict, the U.S. Navy lost 5 ships to mines, four minesweeping units and one fleet tug
(see here). 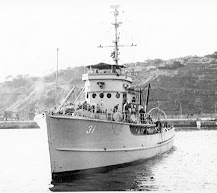 claiming the lives of 21 members of the crew. Ships hitting mines during the Korean Conflict would also cost the U.S. Navy the USS Pirate (AM-275), USS Pledge (AM-277), USS Sarsi (ATF-111) and USS Partridge (AMS-31). Mines continue to be the biggest threat to the world’s navies and account for most ship losses other than accidents.

Another 87 ships were damaged, either by mines or by engagement with shore batteries with last damage occurring in 1953.

Now, about that lesson regarding mine warfare . . .

Another aspect of the Navy's involvement in the Korean War was the sea-borne evacuation of both military units and civilians from North Korea after the Chinese Army entered the war in massive numbers. As set out in Edward J. Marolda's The Hungnam and Chinnampo Evacuations:

The Hungnam Evacuation by the U.S. Navy from North Korea of troops under the U.S. X Corps, including the U.S. 1st Marine Division, 7th Infantry Division, and 3d Infantry Division, and the Republic of Korea I Corps, including the 3d and Capital Infantry Divisions, took place from December 9 to 24, 1950. When the People's Republic of China intervened in the Korean War in late November 1950, its 250,000 ground forces threatened to cut off and destroy UN units operating in the mountains of North Korea. To prevent that catastrophe and to concentrate UN units in more easily defended terrain further south, on December 9 General Douglas MacArthur, Commander in Chief, United Nations Command, ordered evacuation by sea of the U.S. X Corps.

Vice Admiral C. Turner Joy, Commander Naval Forces, Far East, had already alerted Rear Admiral James H. Doyle, his amphibious commander, to prepare for such a contingency and begun deploying naval forces to waters off Hungnam on the east coast of North Korea. He dispatched other units, under Rear Admiral Lyman A. Thackrey, to Korea's west coast to handle evacuation from Chinnampo and Inchon, in company with British, Australian, and Canadian ships, of U.S. Eighth Army and allied forces. The mission at Chinnampo was accomplished between the 4th and 6th of December, although most of the allied forces made their way south in vehicles or on foot. In addition, during December and early January 1951, Thackrey's ships pulled 69,000 military personnel, 64,000 refugees, 1,000 vehicles, and more than 55,000 tons of cargo out of Inchon.

As the marines and soldiers, in biting cold and wind, fought their way out of encirclement at Chosin Reservoir and elsewhere in northeast Korea during December, several hundred Navy and Marine aircraft operating from airfields ashore and from the ships of Task Force 77 (aircraft carriers Philippine Sea, Leyte, Princeton, and Valley Forge, light carrier Bataan, and escort carriers Sicily and Baedong Strait) pummelled enemy ground troops. Other U.S. planes airdropped supplies. Conducting round-the-clock air operations from snow and wind-swept carrier decks and from unimproved airstrips ashore demanded the most of the sailors and marines working feverishly to help bring their comrades out of the frozen hills of North Korea. 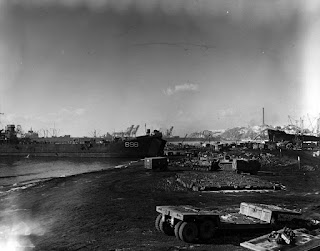 In an orderly fashion, on December 10th the ships under Rear Admiral Doyle, Commander Amphibious Force, Far East (Task Force 90), began embarking the withdrawing ground troops and their equipment from Hungnam (and some ROK 3d Division troops from Wonsan further to the south). The marines, who had endured the hardest fighting, were the first men to board the evacuation ships. They were followed by the ROK units on the 17th and the U.S. Army divisions during the third week of December. By Christmas Eve 1950, Task Force 90 had embarked 105,000 military personnel, 17,500 tanks and other vehicles, 350,000 measurement tons of cargo, and 91,000 Korean civilians. Marine and Air Force transports airlifted out another 3,600 troops, 196 vehicles, and 1,300 tons of cargo. 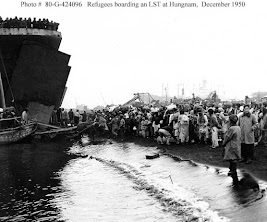 Generally described as an "amphibious operation in reverse", the evacuation of Hungnam encompassed the safe withdrawal of the bulk of UN forces in eastern North Korea. It was the largest sealift since the 1945 Okinawa operation. In barely two weeks, over a hundred-thousand military personnel, 17,500 vehicles and 350,000 measurement tons of cargo were pulled out. In comparison with the retreat in central and western Korea, little was left behind. Even broken-down vehicles were loaded and lifted out. Also departing North Korea through Hungnam were some 91,000 refugees, a large number, but not nearly as many as had gathered to leave.

These evacuations were not only carried out by U.S. forces, but by chartered merchant ships, and by allied ships, including but not limited to Japanese manned LSTs.

Another reference to the LST force here

There were a total of 40 LSTs and 75 marine transports used during the evacuation of Hungnam. All ships making multiple trips from Hungnam and Wonsan to various ports in southern Korea and parts of Japan.

Early in my research I managed to find a list of US LSTs involved in the Korean War – some 40 LSTs. As part of this process I also found that a lot of Japanese and a few Korean LSTs were used. There were a total 40 LSTs used at Hungnam, 11 US, a large number of Japanese LSTs and a few Korean.

The importance of the evacuation is well stated in the following video: