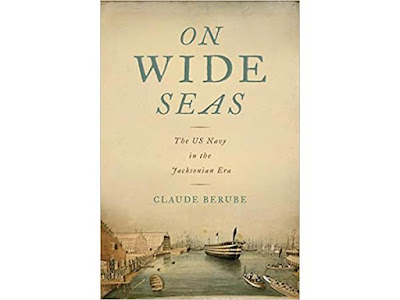 We're going to kick off Midrats' 13th year with someone who has been with us from the start, best friend to the show Dr. Claude Berube!

If you care about American history in general, and US Navy history in particular, you won't want to miss a minute of this Sunday's show.

Claude will be with us for the full hour to discuss his latest and 4th non-fiction book, On Wide Seas: The US Navy in the Jacksonian Era, just released by University of Alabama Press.

Claude earned his PhD in Military History from the King's College, London and holds two master's from Northeastern and the Naval War College. In his 30-year career, he has worked as a defense contractor for Naval Sea Systems Command and the Office of Naval Research, as a staffer on Capitol Hill for two U.S. Senators and a member of Congress, and teaching at the U.S. Naval Academy in the Political Science and History Departments. A Commander in the U.S. Navy Reserve, he has served at the Office of Naval Intelligence, CNO's Deep Red, at Joint Task Force Guantanamo Bay, Joint Analysis Center Molesworth England, and deployed on USS Bunker Hill to the Middle East.

In addition to his four non-fiction books, he is the author of more than 60 articles, and this third novel in the Connor Stark series will be published this fall.