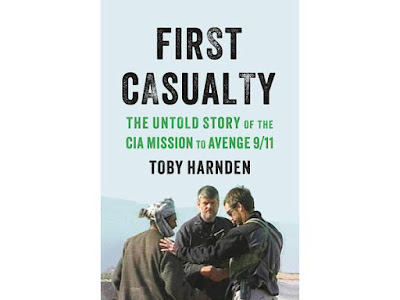 Note the special time - please join us at 1130AM (EST)on 13 Feb 2022 for MidratsEpisode 616: First Casualty: The Untold Story of the CIA Mission to Avenge 9/11 with Toby Harnden

As described on Amazon, "Eight CIA officers are dropped into the mountains of northern Afghanistan on October 17, 2001. They are Team Alpha, an eclectic band of linguists, tribal experts, and elite warriors: the first Americans to operate inside Taliban territory. Their covert mission is to track down Al- Qaeda and stop the terrorists from infiltrating the United States again."

Most may be familiar with one member of that team, Mike Spann. This Sunday we will spend the hour talking about that Team, the first few months of the Afghanistan conflict, and what the war and its future looked like early on as described in the recent book, First Casualty: The Untold Story of the CIA Mission to Avenge 9/11.

The author Toby Harnden will be with us for the full hour to discuss the book and the story it tells.

Toby is an author, journalist, and a winner of the Orwell Prize for Books. A former foreign correspondent for the Sunday Times of London and the Daily Telegraph who reported from thirty-three countries, he specializes in terrorism and war. Born in Portsmouth, England, Harnden was imprisoned in Zimbabwe, prosecuted in Britain for protecting confidential sources, and vindicated by a $23 million public inquiry in Ireland. A dual British and US citizen, he spent a decade as a Royal Navy officer before becoming a journalist. He holds a First Class degree in modern history from Oxford and is the author of Bandit Country: The IRA & South Armagh and Dead Men Risen: An Epic Story of War and Heroism in Afghanistan. Previously based in London, Belfast, Jerusalem, Baghdad, and Washington, DC, he lives in Virginia.