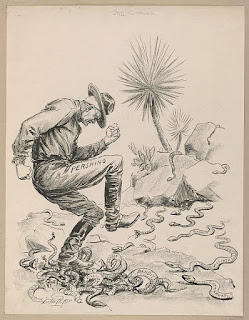 As some of you might have gathered over the years, I am a fan of the punitive expedition. More particularly, the form of punitive expedition as so well defined by Kevin Benson, Col (ret) in his short 2019 essay Bringing Back the Punitive Expedition

A punitive expedition results in a measured, relatively swift, focused response. It can be of some duration but only long enough to achieve the policy ends of punishing the group that threatened US interests or caused US casualties. There is no regime change, no re-ordering of the existing power structure in a region. A punitive expedition demonstrates the will and ability of the US government to act with violence. Especially when striking into ungoverned areas there is no Phase V (enable civil authority) as there is no civil authority to reestablish. The purpose of the punitive expedition is to act with violence and return to home station. The linkage to policy is straightforward. In ungoverned or poorly governed spaces, a punitive expedition is measured, focused, and not open-ended. A punitive expedition acts with diplomatic and informational efforts, each reinforcing the other. Indeed strategists and planners must bear in mind the political object irrespective of the development of use of force options. Again we return to Clausewitz: “The political object—the original motive for the war—will thus determine both the military objective to be reached and the amount of effort it requires.”

I commend the rest of his essay to your reading.

We have a lot of units in our military that would be excellent at carrying out such missions. The problem is keeping our focus in applying what can be an effective deterrent to actions that would harm our country.