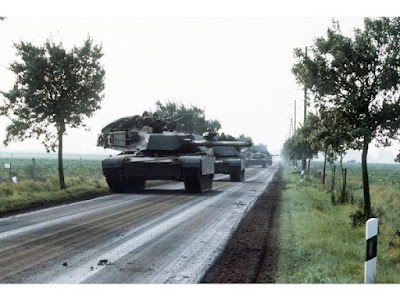 Please join us at 5pm EST on 6 February 2022 for Midrats Episode 615: Gaming Out WWIII with Michael Cee:

Decades of peace and relative stability in Europe is suddenly shattered as armies start to mobilize on a scale not seen since WWII.

What is there to learn for today from what could have happened at the end of the Cold War?

In addition to the above teaser questions, this Sunday from 5-6pm Eastern with our guest Michael Cee we will dive into the research, tools, wargaming, and art of creating alternative historical fiction about what may have happened with the wrong people in the wrong positions of power at the wrong time in the late 1980s.

Michael is the creator and author of World War III 1987, a blog that takes a detailed look at a hypothetical Third World War set in 1987, as well as several topics related to the NATO-Warsaw Pact military balance in the later years of the Cold War. He is also the author of a second blog, Today’s Defense and International Relations Topics that’s centered on contemporary geopolitical and defense issues and news. He is a 44-year-old former Air Force officer who has also spent time in government service and as a senior member of a research institute. He has earned an MSFS from the Edmund A. Walsh School of Foreign Service at Georgetown University, as well as an MPA and PhD in Politics from Princeton University. Over the summer of 2019, Michael signed a two-book deal with a New York City publishing house. At present he is making final edits on his first novel, which is also based on a hypothetical global conflict set in 1987.