The "artist" as idiot 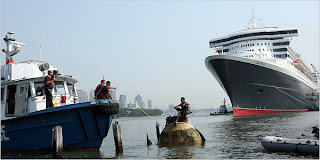 A self-portrait of an idiot revealed when an "artist" attempted to penetrate the security zone around the Queen Mary 2 in New York in a submarine like device, as set out here with several photos.

In my view, the cops should have blown him out of the water.

My only question is, why are the police suddenly concerned, when judging by the gunk on the side of the little sub, this isn’t the first time its been out? I will give them that it does look like it could be a large buoyant bomb, but why on earth would someone target a cruise ship?

Just for proof, you might recall the AQ rep arrested in Turkey as he was plotting to attack Israeli cruise ships (see here) and other threats.

And things the "artist" should have known:

Since September 11th, much stricter security measures have been in place to protect ships and their passengers.

Every U.S. port now maintains and enforces a minimum 300-foot "no float zone," a security perimeter that prohibits private craft from coming near cruise ships. In addition, cruise ships are getting an armed U.S. Coast Guard escort in and out of port.

There is also stricter access control to ports and terminals: Passengers are now required to show their tickets to enter both the port area and the terminal.