East & West: Meeting of the twain 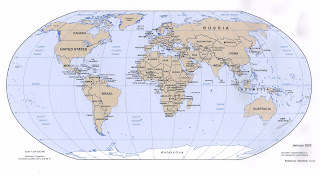 Long, thought provoking read "The Revolution in Transatlantic Affairs" on a whole lotta changes going on as China and Islam rise:

The return of China alone would be enough to make the West "live in interesting times." To make things even more interesting, Islam too is back, this time in the form of a totalitarianism which manages to combine an ideological comprehensiveness (Salafism) unseen since Communism and an existential nihilism (jihadism) worthy of Nazism. A generation ago, the post-Vatican II Catholic world finally espoused the 20th century, and the Church went on to play a critical role in the collapse of communism; meanwhile, under the increasing influence of Wahhabism, the Muslim world was going in the opposite direction, and this great leap backward brought them back to the 14th century.40 If the Saudi caliphate does not soon undertake its own Vatican II, chances are the Muslim world will never make it back to the 21st century.

It is time for the Transatlantic chattering class to realize that there is a time for problematizing, and a time for strategizing ...

Change is not for weaklings.

From another time, The Ballad of East and West:

Oh, East is East, and West is West, and never the twain shall meet,
Till Earth and Sky stand presently at God's great Judgment Seat;
But there is neither East nor West, Border, nor Breed, nor Birth,
When two strong men stand face to face,
tho' they come from the ends of the earth!

Other thoughts from here:

Of course, Kipling himself was a talented writer with a more subtle and complex view of the world and humanity than he is often given credit for. I am sure if he were here with us today he would also reject the notion of East and West as impermeable cultural blocs. After all, his ballad depicts the differences between East and West simply in order to emphasise later the universality of human values. The lines I quoted to you at the start of this lecture are well-known. But how many know the lines which follow?:

‘But there is neither East nor West, Border, nor Breed, nor Birth,

When two strong men stand face to face, tho’ they come from the ends of the earth!’

Unfortunately the two strong men in question, the Colonel’s son and Kamal, were forced to commit daring acts of almost suicidal bravery before they were able to overcome their cultural differences and respect each other, and I admit that this is not an altogether practical proposition in the modern world. If it were, I would not be quite so keen to attend summits and meetings of international organisations.

Instead, I think that in the modern age we need to turn to a modern thinker, and here I would like to quote Solzhenitsyn, who had first-hand experience of the terrors which can be unleashed by those whose minds are closed to diversity and tolerance.

In a globalised world, we simply must accept that equal and closer partnerships are the best, perhaps the only, way to ensure wealth, health, security and better mutual understanding for all our peoples. We need to work together to tackle the new types of problem that the dark side of globalisation throws up.

Email ThisBlogThis!Share to TwitterShare to FacebookShare to Pinterest
Labels: China, Islam, It's a Small World