Japan aid to the Philippines 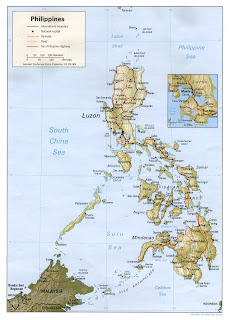 Japan to help the Philippines out, as reported here:

apan announced on Tuesday more than 11 million dollars in financial assistance to the Philippines to implement disaster prevention and maritime security projects.
***
The first grant, worth 779 million yen (6.53 million dollars), would be used to fund a project improving flood forecasting and warnings system in the northern Philippine province of Pampanga.

The project, to be implemented by the Philippines' weather bureau, will provide technical support for improving the system operation for flood forecasting and disaster prevention.

The second project, to be funded by a 609-million-yen grant, would improve and enhance the capability of the Philippine coast guard for search and rescue as well as counter-terrorism.

UPDATE: U.S. offers to help fight terrorism, too, and Australia is in the mix, as set out here:

The United States military is willing, if requested by the government, to help the Philippine Armed Forces fight the communist New People's Army in addition to its current assistance to defeat the Abu Sayyaf terrorists in Mindanao.
***
Keating said the US military is focusing efforts on the defeat of the Abu Sayyaf. A number of US forces are in Mindanao to provide technical assistance in identifying whereabouts of terrorist leaders in the region.

On the possible violation of Philippine sovereignty if they help fight the communists, Keating said: “We’re very careful about sovereignty issue and it is only in response to the Philippine government request that we respond."

The RP-US Mutual Defense Board and Security Exchange Board re-affirmed its commitment under the RP-US Mutual Defense Treaty to “defend one another against common threats and we will continue to cooperate in responding to various security concerns in the region."
***
At the same time, Armed Forces chief Gen. Hermogenes Esperon Jr. said the military establishment is looking forward to trilateral exercises between Filipino, United States and Australian forces in the near future.

“We expect that there will be an expansion from bilateral activities to multilateral where it is legally permissible," said Esperon in a joint press conference with Admiral Keating.

Filipino and US forces have been jointly training for the past decades, with focus redirected recently on the fight against terrorist organizations, particularly the Abu Sayyaf Group and the Jemaah Islamiyah.

President Arroyo and Australian Prime Minister John Howard signed a Status of Visiting Forces Agreement last month that will govern the conduct of joint military training for the two countries’ military forces. The agreement awaits ratification by the Senate.

“We will do it (trilateral exercises) as addressing security threats cannot be limited to bilateral arrangements. On matters of terrorism for example, that could be global, multilateral. There are benefits in working together because that saves us time and resources," Esperon said.

He said neighbors in the region have been engaging in multilateral exercises with other countries and he sees nothing wrong with the Philippines adopting the same strategy. “In the region, we see a lot of multilateral activities, trainings, exchange of information and we (military establishment) don’t see any reason why we could not go to that direction," he said.

Email ThisBlogThis!Share to TwitterShare to FacebookShare to Pinterest
Labels: Barnett, Japan, The Gap