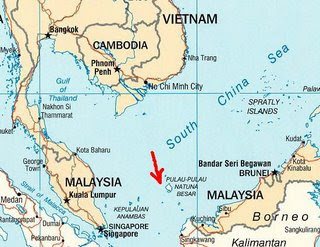 1. LIBYA: Fishing vessel fired upon, sailor killed 28 Jul, in Libyan waters. A Libyan security vessel opened fire on an Egyptian fishing vessel, killing an Egyptian sailor. The fishing vessel returned to Alexandria port on 30 Jul with a crew of 13 and the body of the deceased sailor. It is unknown if the Egyptian vessel had permission to fish in Libyan waters
***
4. SOUTH CHINA SEA: Fishing vessel (HUYU 908) fired upon 26 Jul at 0730 local time while underway in position 03:16N-105:27E, approximately 40NM west of the Anambas Islands. The Chinese fishing vessel was approached by a small rubber boat. Five men armed with guns, shot at the fishing vessel and attempted to board her. The (HUYU 908) increased its speed and managed to escape. The small rubber boat was launched from a navy blue tug barge and has a marking of ì505î on its bow. The bullets penetrated the starboard hull of the (HUYU 908)ís bridge and damaged three pieces of glass. No one was injured. The fishermen reported the incident to the Malaysian authorities (RECAPP).
.
5. NATUNA ISLANDS: Vietnamese fishing vessel fired upon by Indonesian Navy 19 Jul after failing to comply with orders to stop while in Indonesian waters. The shooting occurred after four Vietnamese fishing vessels entered Indonesian waters around the Natuna Islands. Two men were confirmed dead and another wounded. The Vietnamese fishing vessels are suspected of poaching in the Indonesian territorial waters. Last year, the Indonesian Navy's Western Fleet, which supervises the waters in the western part of Indonesia, held more than 100 foreign vessels,
mostly from Malaysia, Thailand and Vietnam, for illegal fishing. Sixty percent of them were caught around Natuna Islands (LM: Kyodo).
.
6. SPRATLY ISLANDS: Chinese Navy fires at Vietnamese fishing boats 9 Jul. A group of Vietnamese boats fishing in the disputed waters reportedly came under fire from Chinese naval vessels, sinking one Vietnamese boat. One fisherman was killed and several others injured. The dispute comes among the growing tension between the two countries over control of the Spratly Islands. Vietnamese officials say that there have been minor confrontations whenever one of their boats has encountered a Chinese counterpart in the disputed areas (LM).