FBI swings into action in following up on some activity deemed "suspicious" by Washington State ferry crews, as set out here:

The FBI is asking for the public's help to identify two men who have been seen acting suspiciously aboard Washington State ferries recently.

The FBI released a bulletin late Monday, including photographs of the two men. One of the photos shows the men side-by-side and the other is a solo shot of one of them. They were snapped by a ferry employee who thought the pair acted suspiciously.

The FBI says the men were seen on more then one ferry and more than one run over the past several weeks. They were also taking photos of parts of the boat, which the agents won't reveal, but that apparently aroused the suspicions of passengers and crew alike. 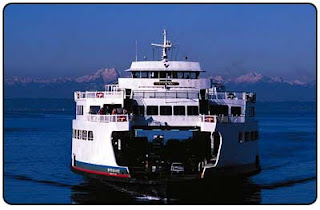 Not the first warning concerning the Washington State ferries, see here for the 2006 warning and here for the 2005 post-London bombing warning which contains this possible rationale for concern over the WS ferries:

"But it is best to be proactive as Washington is home to the largest ferry system in the nation and third largest in the world. We are also encouraging other passengers vessels to increase their security precautions and we encourage all citizens to be on the lookout for suspicious or unusual activity on or near our waterways," adds Garrett.

A reminder of things to look for along the waterways here.

UPDATE: More info here with a link to this article in the Seattle Post-Intelligencer:

Asked to specify the behavior, Gomez said: These two men "showed an inordinate interest in the operation of the shipboard systems as opposed to the beautiful scenery passing by." Gomez said he would not be more specific because to do so would alert potential terrorists on how to better mask their intentions.

The Seattle FBI -- which houses both bureau and interagency analytic centers -- has been tracking suspicious activity on ferries for several years. Last year, a Justice Department report named the Washington State Ferry system as the No. 1 target for maritime terrorism, sharing that status with Gulf Coast petroleum tankers.

Behind that dubious distinction was the work of the FBI's field intelligence group and the Washington Joint Analytic Center. Supervisory intelligence analyst Ted Turner of the Seattle FBI office told the Seattle P-I last year that "there was an extremely high likelihood, in a handful of incidents, that there was pre-operation planning" for a terrorist attack on the ferry system.

UPDATE2: Apparently the Post-Intelligencer decided not to run the FBI photos, as set out here, with, an explanation here:

But running a photograph of two men who may as easily be tourists from Texas as terrorists from the Mideast with a story that makes them out to be persons of interest in a terrorism investigation seems problematic, to say the least.

H/T: Bill Hobbs at NewsBusters. Perhaps the name of the Seattle paper refers to the type of thinking you get after you lose your intelligence.