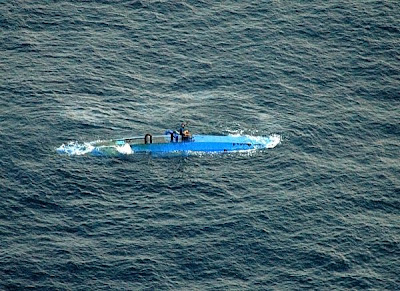 PACIFIC OCEAN (Aug. 19, 2007) - Coordination between U.S. Coast Guard, Homeland Security Customs and Border Protection, and crews from a U.S. Navy P-3C Orion and the frigate USS Dewert (FFG 45), resulted in the seizure of an estimated $352 million of cocaine during an interdicted and boarding operation on a self-propelled semi-submersible vessel in the Eastern Pacific, Sunday, Aug 19. Photo courtesy U.S. Customs and Border Protection (RELEASED)

And if the druggies can do it, so can the other enemies of the the United States...

More on the story here:

Four suspected drug runners and 11 bails of cocaine were plucked from the Pacific Ocean off the Mexico-Guatamala coast, the U.S. Coast Guard said Wednesday.

Coast Guard officials in Alameda, Calif., said a 50-foot semi-submersible craft was spotted Monday by a U.S. Customs and Border Protection surveillance aircraft about 300 miles southwest of the Mexico-Guatemala border. The vessel was abandoned by its crew and sank a short time later, the Coast Guard said. The cocaine bundles bobbed to the surface as a boarding team from the USS DeWert approached to rescue the crew.

"This case shows the challenges our counter-drug patrol forces face, and the lengths to which the drug smuggling organization will go to get their deadly product to the U.S.," said Rear Adm. Craig Bone, tactical commander of U.S. counter drug operations in the Eastern Pacific. "This low-profile semi-submersible craft was very difficult to detect."