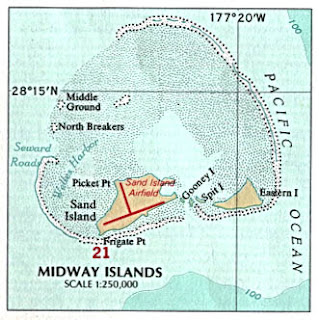 Once again, a brief note at "This Day in Naval History" that fails to convey the whole story:

1867 - Captain William Reynolds of Lackawanna raises U.S. flag over Midway Island and took formal possession of these islands for the United States.

As noted here, one of the attractions of Midway was its potential use as a "coaling station:"

Midway was discovered July 8, 1859, by Captain N.C. Brooks of the Hawaiian barque Gambia, and by him called Middlebrook Islands. An account of this discovery, reprinted from the Polynesian of August 13, 1859, appears in the Paradise of the Pacific for October, 1936 on page 23. Captain Brooks took possession of the two islands in the name of the United States, a peculiar proceeding in view of the flag of his vessel, owned by B.F. Snow of Honolulu. Had he given the editors of the Polynesian a less glowing account of the new discovery, we would be inclined to believe the story that Captain Brooks kept the discovery secret so that he might sell the information to the North Pacific Mail and Steamship Company, who were on the lookout for a mid-Pacific coal depot for the vessels on the oriental run.

However that may be, the Pacific Mail Steamship Company did learn about the atoll, and eight years later succeeded in having the American government send the U.S.S. Lackawanna to make a careful survey. With considerable ceremony, on Wednesday, August 28, 1867, in compliance with the orders of the Secretary of the Navy, formal possession was taken of what was termed Brooks' Island. Wrote Captain William Reynolds, Commander of the Lackawanna: 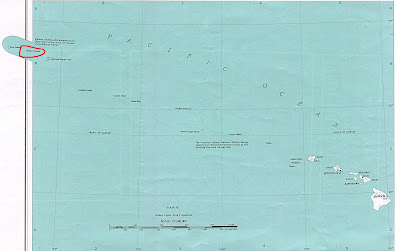 "It is exceedingly gratifying to me to have been thus concerned in taking possession of the first island ever added to the dominion of the United States beyond our shores, and I sincerely hope that this will by no means be the last of our insular annexations. I ventured to name the only harbour at this island after the present Honourable Secretary of the Navy (Welles), and to call its roadstead after the present Honourable Secretary of State (Seward)."

In 1870 the United States Congress appropriated $50,000 to be spent in blasting a 600-foot wide ship channel through the reef into the lagoon, doubtless at the insistence of the Pacific Mail Steamship Co., and based on observations made by the Lackawanna. The U.S.S. Saginaw was detailed to carry the divers and equipment to Midway, arriving there on March 24, 1870. Dredging operations proceeded during the summer of 1870, but weather was so bad that at the end of the seven months little had been accomplished, the funds were nearly exhausted, and the project had to be given up.

The need for coaling stations was driven by the adoption of steam propulsion for ships, as touched on here. 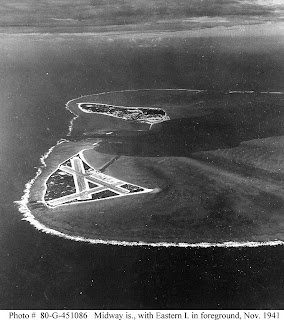 Midway, of course, was the focus of the great WWII sea battle - Battle of Midway, which may have been the turning point of the war in the Pacific.

On the map of the Hawaiian Island chain, Wake is off to the left, circled in red. As noted on the map (which can be enlarged by clicking on them, "Midway Island.. are not part of the State of Hawaii") though it is now administered by the Department of the Interior.
Posted by Mark Tempest at 8/28/2007 12:19:00 PM