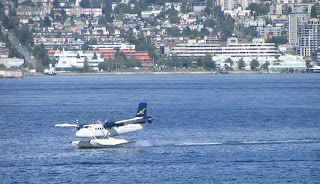 A Canadian concern according to one Canadian Senator: "Float plane security is lax":

B.C.'s coastal transportation systems are wide open to terrorist attacks, and although security checks of B.C. Ferries passengers aren't practical, screening float-plane patrons and bags is, and should be done, Liberal Senator Colin Kenny said Monday during a visit to Victoria.

"We can't protect everything all the time," Kenny said during a meeting with the Times Colonist editorial board, explaining that mass transit, like B.C. Ferries, doesn't lend itself to airport-like security - even though the ferry corporation has been the target of past bomb threats, including two this summer.

But adding one screening machine and extra security staff to enhance safety on float planes is neither a costly "nor complicated procedure," he said.
Liberal Senator Colin Kenny, shown about to board a float plane in Victoria's Inner Harbour on Monday, says it would be easy to improve security on the planes.

Underlining what he sees as a very real threat to Victoria's Inner Harbour and Vancouver's ports, especially during the 2010 Olympics, Kenny said: "These aircraft take off fully loaded very close to buildings and there's just zero reaction time."

Kenny headed up a Senate committee on national security and defence that in March released a scathing report - a follow-up to a similar dire warning in 2003 - that pointed to grossly inadequate resources assigned to patrolling thousands of kilometres of coastline.

The report also suggested float planes be subject to the same passenger and baggage checks as those in larger airports. "What it would mean is instead of checking in 10 minutes ahead of time you'd have to check in 15 minutes ahead," Kenny predicted.

But Kenny's logic is lost on Randy Wright, senior vice-president of Harbour Air Seaplanes, who flatly rejects the senator's assessment. "There's a lot bigger targets out there so we don't see the risk," Wright said. "The bigger bang for your buck would be to hit city buses or B.C. Ferries."