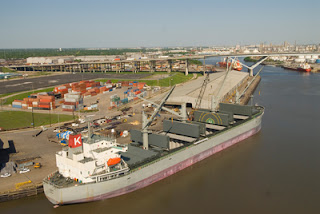 Interesting approach to port secuirty from Houston, as set out in Public-private partnership created to upgrade port security:

The district is designed to serve as a mechanism for Harris County, the Port of Houston Authority and others in the public and private sectors to share the local cost of security grants, according to port officials. It also will help with the operation and maintenance of new security projects, they said.

About $31 million in security grants has been acquired to benefit public and private groups in and around the port in recent years, said Jim Edmonds, chairman of the Port of Houston Authority. However, there has been no formal system to fund the cost and maintenance of new security equipment, despite public and private cooperation.
***
If successful, the new district could serve as a model for port security nationwide, according to Chad Sweet, chief of staff for Department of Homeland Security Secretary Michael Chertoff.

"We've got to make sure this is a free-market solution" rather than a way to raise taxes, said Sweet, who attended the ceremony at the Port of Houston Authority headquarters.

The county and port have already been working with cities along the Houston Ship Channel and private petrochemical, chemical and refinery facilities, including members of the East Harris County Manufacturers Association.

That group, called the Port Strategic Security Council, recognized that the best security for the region was a layered systemwide approach and not facility by facility, Houston port officials said.