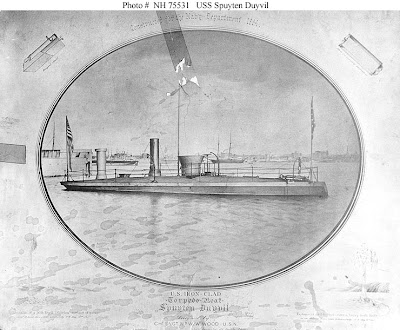 In the Bronx area of New York City lies a neighborhood named for a stream that used to flow there:

Spuyten Duyvil (pronounced "SPITE-uhn DYE-vuhl") is the name of a subsection of the Riverdale section of the Bronx in New York City. The area is named after Spuyten Duyvil Creek, a Dutch name with various historical spellings and meanings. Some of the names are Speight den Duyvil, Spike & Devil, Spitting Devil, Spilling Devil, Spiten Debill and Spouting Devil, among others. Meanings come down to the physically based "Spinning Devil" or "Devil's Whirlpool" or the Anthony Van Corlaer legend based, "Spite the Devil." Spuyten Duyvil Creek was filled in in the late 19th century. The name Spuyten Duyvil currently refers to the southernmost section of Riverdale, below West 232nd Street (or below 239th Street by some definitions - though this definition is considerably less accurate.)

This neighborhood is home to The Henry Hudson Memorial Park and the Henry Hudson Bridge, which connects it to the island of Manhattan. It is also the location of the Spuyten Duyvil train station, which is served by the Hudson Line of the Metro-North Railroad.

"Spitting Devil" sounds like it could be a warship name, doesn't it? Except there is some dispute about the translation-see here- where "Spuyten Duyvil" may mean "spouting meadow." See also here for more legends about the name (toward the bottom under "sidebar").

But let's not let accuracy in translation get in the way of a fine warship name - this is a short tale about an innovative vessel designed to partially submerge itself so as to better avoid enemy fire while carrying out its mission of attacking enemy ships and fortifications. Today we look at USS Spuyten Duyvil, a 207 ton armored torpedo boat built along USS Monitor-like lines, Spuyten Duyvil could lower itself in the water until she had little freeboard exposed: 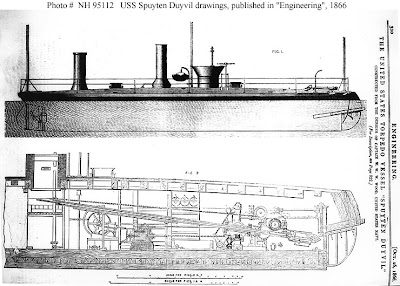 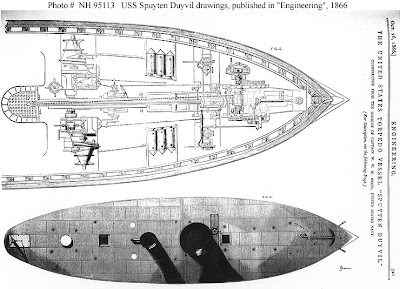 The length of the vessel over all is 84 ft. 2 in., and her length from the after edge of her stern post to the forward edge of the gate frame is 73 ft. 11 in., whilst her breadth moulded in 19 ft., and her extreme breadth 20 ft. 8 in. The depth of her hold is 9 ft. 11½ in., and her draught when launched with 10 tons of torpedo machinery and 2½ tons of her propelling engines on board was 4 ft. When fully equipped, this draught was increased to 7 ft. 5½ in., and, by pumping water into compartments provided for the purpose, as will be explained presently, this draught can be increased to 9 ft. 1 in. when the vessel is going into action. At this latter draught the water is about level with the gunwale, but, owing to the arched form of the deck, the vessel has still under such circumstances 250 tons of floation left (NB E1: This is questionable given the size of the vessel), or, in other words, an additional load of that amount would be required to sink her.

She was designed to get close to opposing ships and place a "torpedo" (not the self-propelled type we think of today, but more akin to a modern day mine) under the hull of the enemy ship, where it could be exploded with great effect. A thorough description of the mechanism for launching the "torpedo" is provided here. It appears the torpedo was launched underwater, presumably making placement under a ship's hull easier. See also here.

In any event, the ship saw limited action, participating in defeating a Confederate river raid and in clearing obstructions on the James River, allowing President Lincoln travel by ship to reach Richmond after its fall.

This unique ship apparently served as a platform for other experiments and was taken off Navy the Navy list about 1880.

Today, even the Army has semi-submersible ships.