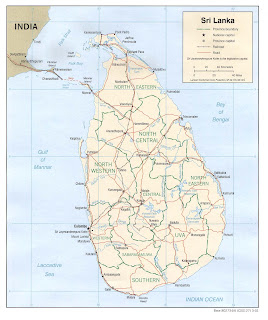 Jane's Intelligence Review- well known International Review Agency has stated that the LTTE's strategic need to acquire high-tech weaponry, such as surface-to-air missiles, indicates that its activities will continue.

The Jane's Intelligence Review in a special edition highlighting LTTE terrorist activities stated that the LTTE's strategic aim of defeating the Sri Lankan military and securing a political victory in the form of a separate Tamil state depends on the organization's capacity to source money and arms abroad.

It added that this process can only be undermined if the western law enforcement bodies take steps to crackdown funds and weapons to the LTTE. "After accounting for its estimated USD8 million per year of costs within LTTE-administered Sri Lanka, the profit margin of its operating budget would likely be the envy of any multinational corporation," the report said.

According to the report, though the estimated annual income of the LTTE is between USD 200 to 300 million its costs are only USD 8 million.
***
The report said it further makes clear the LTTE wished to obtain military weaponry that could destroy boats. Illustrating the LTTE's decision-making structure and relative wealth, the operatives - allegedly naming and referring to Pottu Amman as responsible for 'outside purchasing' of arms - discussed a price of USD900, 000 to USD937, 000 for an initial package of 10 SA-18 surface-to-air missiles, 500 AK-47 assault rifles and the necessary training, which was to take place in Sri Lanka, the Jane's Review further said.
***
The LTTE agents specified the point of delivery should be a ship-to-ship transfer in the Indian Ocean. The Jane's Review report on the LTTE fund raising described the European Union as an additional theater for the terrorist group's financial operation. The Review has given a detailed report on the LTTE activities in the recent past to strengthen their point.

It said that since May 2006 since its proscription increased law enforcement activities have taken place in France.The report said Lawrence Thilagar, former head of the LTTE international and Velyummylum Manoharan have been previously based in Paris. Manoharan was also granted French citizenship since May. The French authorities started the raids, the report said, to coincide with the fundraising activities of the Tamil Tigers, believed to start every Friday evening and last until the following Sunday.

Citing an Indian news report the Jane's report said in France every Tamil family had to pay Euros 2000 (USD 2728) and every Tamil business had to pay Euros 6000 (USD 8185) every year to the LTTE. The report said aggressively violent treatment was applied to those who failed to pay, like abducting Tamils to a LTTE associate owned farm and torturing and ransoming until their families agreed to pay significant amounts to buy the release.

The report said the LTTE outsourced its fundraising tasks to Tamil gangs on a 20 percent commission basis. This had been done to allow the LTTE some plausible deniability in the event of a raid. It further said reports about employing gangs for extortion and other illicit activities by the LTTE were also prevalent in the United Kingdom.

Reporting LTTE fundraising activities in Norway in May 2007 the report said by a credit card fraud some 16 men acting on behalf of the LTTE had gathered NOK 5.3 million (USD 890,000) and on being convicted of the skimming went to jail for five and half years. The report said international credit card frauds are also outsourced on a commission basis.

In May 2007 a six man Tamil team from UK, according to the report arrive in the port city of Singapore with blank cash machine cards, a cash machine card encoder and a portable computer that contained data about card account holders in the United Kingdom.

The demeanor of one of the six aroused suspicions of a security guard and the arrest of all with USD 354,070 in a hotel they have accumulated after three days activity. All were convicted to seven to 10 year's jail terms. Similar frauds by the LTTE have been caught in Kenya, Sri Lanka and Thailand, the report says.