Sunday Ship History: Things you might hear at sea

Some things stick with you, long after the time and space continuum moves on.

Late at night, a man whistles for a dog and suddenly you remember getting ready to take part in one of the many pieces of work that make up duty at sea - sea and anchor detail, replenishment at sea, general quarters.

Many of those began with the sound of a trilling pipe, the "Bosun's Whistle" sounding over the ship's loudspeaker system. "All hands!" it calls (listen here by clicking on "All Hands" in the right column). TweTweeee!TweeTweeeeeee! (well, maybe).

And the penetrating sound of the pipe got by the sounds of forced draft blowers and machinery noises into your brain.

My least favorite whistle was "Sweepers" which seemed to me to go on forever and made my brain hurt. I think that "Mess Call" here, while always welcome, was also a lengthy test of the Bosun's skills and a test of patience for the listener. Your opinion may vary.

Of course, some ships might use bugle calls, and "Morning Colors" 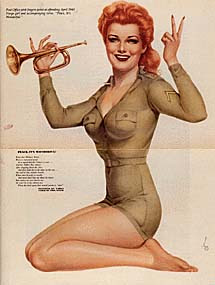 might be heard across the piers in port and "Taps" in the evening. I doubt, however, that any ship's bugler resembled the nearby Varga girl...

And, of course, the sounding of the ship's bell for the arrival of dignitaries, the Commanding Officer and as a timekeeping device:

Before the advent of the chronometer time at sea was measured by the trickle of sand through a half - hour glass. One of the ship's boys had the duty of watching the glass and turning it when the sand had run out. When he turned the glass, he struck the bell as a signal that he had performed this vital function. From this ringing of the bell as the glass was turned evolved the tradition of striking the bell once at the end of the first half hour of a four hour watch, twice after the first hour, etc., until eight bells marked the end of the four hour watch. The process was repeated for the succeeding watches. This age-old practice of sounding the bell on the hour and half hour has its place in the nuclear and missile oriented United States Navy at the dawn of the Twenty-First Century, regulating daily routine, just as it did on our historic vessels under sail in the late Eighteenth Century.

Sometimes, after a change of command, this tradition becomes a means of reminding a ship's crew that a new Captain has taken over - if the departing Captain had the bell sounded, the arriving CO might order it stopped and vice versa. Just a little symbol that a change has taken place. 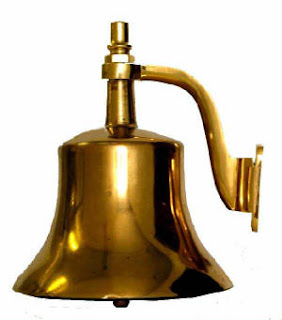 So, whistles, bugles, and bells. Sounds you might hear at sea amongst all the other sounds.

For another recollection of something you might hear at sea, visit this previous post Breakaway Music.
Posted by Mark Tempest at 8/19/2007 09:46:00 PM