Like a cornered animal, the forces loyal to Khadafy have tried a number of tricks to slow the import of assistance to Libyan rebel groups. These have included the sowing of mines as set out in this NATO Shipping Centre NAVWARNS:


CHART BA 3402
1. NATO AND COALITION SHIPS DETECTED THE LAYING OF MINES IN
VICINITY OF MISURATA HARBOUR ON 29 APRIL 11. THREE MINES WERE
IDENTIFIED.
2. MINE COUNTERMEASURE OPERATIONS HAVE REDUCED THE THREAT TO SHIPPING.
3. MARINERS ARE THEREFORE ADVISED TO ADOPT SIMPLE PRECAUTIONS WHEN
ENTERING AND LEAVING MISURATA HARBOUR SUCH AS:
- ADDITIONAL LOOKOUTS FROM THE FORECASTLE,
- REDUCED SPEED IN SHALLOW WATERS.
4. THE PORT OF MISURATA IS UNDER THE CONTROL OF THE PORT AUTHORITY
WHO WILL ADVISE SHIPS ENTERING AND LEAVING ON THE SECURITY SITUATION
IN THE PORT. NATO DOES NOT CONTROL THE PORT.

You will note that mine countermeasures were employed, as set out here:


HMS Brocklesby, one of the Royal Navy’s Mine Counter-Measures Vessels, has destroyed a mine laid by pro-Qadhafi forces in the port of Mistrata on the Libyan coast.

Forces loyal to Colonel Qadhafi have made repeated attempts to close down the port to limit the flow of humanitarian assistance to the population of Misrata.

Using her sonar and Under Water Mine Disposal System, Seafox, HMS Brocklesby successfully located and destroyed a buoyant mine just one mile from the entrance to the harbour.

The mine, containing more than 100 kilograms of high explosives, had been crudely placed by pro-Qadhafi forces using an inflatable dinghy to transport it to sea.

Another ploy by Khadfy loyalists has been the use of Rigid Hulled Inflatable Boats (RHIBs) stuffed with explosives and "crewed" by mannikins. This "Vessel Borne Improvised Explosive Device" (VBIED) threat, too, has thus far been defeated. See NATO Maritime assets thwart another attack on Misrata by pro-Qadhafi forces: 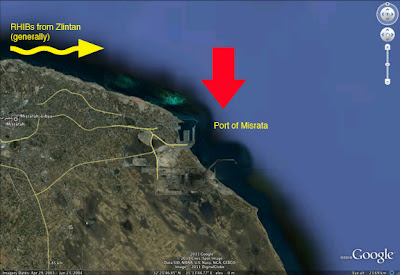 In the early hours of 16 May, maritime forces engaged in the NATO-led Operation Unified Protector detected two rigid-hull inflatable boats (RHIBs) that appeared to have deployed from the vicinity of Zlintan and were headed towards Misrata. NATO forces reacted by sending warships and helicopters to investigate and identify the RHIBs.

As NATO forces made their approach, one RHIB stopped in the water as the second escaped at high speed to the West, towards Zlintan.

An explosive ordnance disposal team from an allied warship was deployed to inspect the abandoned RHIB and discovered a large quantity of explosives (approximately one tonne) and two human mannequins. In view of the obvious threat posed by the explosives, the decision was made to destroy the RHIB at sea. This was carried out by the allied warship using small arms fire.

This incident bore similarities with a recent incident, where pro-Qadhafi forces laid sea-mines in the approaches to the port of Misrata. However this is the first evidence of an attempt to use an improvised explosive device with decoy human mannequins to threaten commercial shipping and humanitarian aid in the area of Misrata.

This is also the third incident in recent weeks where pro-Qadhafi forces have been active on the seas, a change in their operations that signifies their continued intent to bring harm to civilians or to attack NATO vessels.

NATO photos from here.
UPDATE: NATO video brief from 17 May 11. Discussion of RHIBs begins about 6:15 mark: