Somali Pirates: Hijacked ship with 24 Chinese sailors in Arabian Sea rescued by US and Turkish Navies 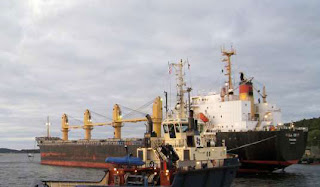 
The 24 Chinese sailors on board a Panama-flagged bulk cargo ship, hijacked by pirates yesterday at the Arabian Sea, have been rescued, as Turkey and U.S. navy ships in the nearby rushed to them and chased away the pirates, Xinhua News Agency reported.

About seven suspected Somali pirates have left the ship, "Full City", and the 24 Chinese workers are found safe, locking themselves in the safety vessel of the ship, the report said. Guarded by U.S. Navy ships, a group of Turkey Navy commandos boarded the pirated ship.

The pirates attacked "Full City" at midday on Thursday local time, and seized it about 450 nautical miles off the coast of Mumbai in India.

Update: More on the rescue from the Turkish Navy point of view from Saturn5 at his blog post TCG Giresun Saves M/V Full City:


Upon arriving to M/V Full City, that was damaged by the rocket-propelled grenade and small arms fire of the pirates, communication with the crew of the ship was established.


The pirates had boarded the vessel but the crew managed to lock themselves up in the safe house. Patrolling in the area, a Indian naval aircraft reached there and found a pirate mother ship next to the MV Full City and a skiff in the vicinity.

The naval aircraft warned the pirates on radio to leave the merchant ship immediately. Heeding to the warning, the pirates departed from the area at full speed. The ship was thus saved from being hijacked due to the prompt action.


Full City photo by Tomas Østberg- Jacobsen from Shipspotting.com and used in accord with the terms of that site.
Posted by Mark Tempest at 5/06/2011 12:54:00 PM