A War of Words Over the South China Sea 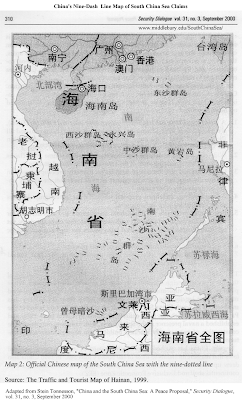 China responds to the U.S. Senate resolution concerning the South China Sea as set out in China slams US resolution on Spratlys dispute:


China yesterday slammed the passage of a US Senate resolution condemning the use of force in the disputed waters in Southeast Asia, saying it “turns a blind eye to facts.”

Chinese Foreign Ministry spokesman Hong Lei said the US resolution “confuses right and wrong, and thus does not hold water.”

“We hope relevant US senators do more for regional peace and stability,” a transcription of Hong’s press briefing in Beijing read.

Hong said the dispute with the Philippines and other Southeast Asian countries revolves around islets and reefs comprising Spratly Islands, which the Chinese call Nansha. There are also disputes over demarcation of territories, he said.

He stressed that concerned parties should settle their differences bilaterally through direct negotiation.

Hong said free navigation in the South China Sea has never been affected by the disputes.

The US Senate resolution calls on all parties to resolve relevant disputes through multilateral and peaceful means.

It also said the United Nations Convention on the Law of the Sea (UNCLOS) should be the basis for resolving the dispute and calls on the US armed forces to take action to ensure free navigation in the South China Sea and West Philippine Sea.

“It is imperative for concerned parties to take concrete steps to ease tensions in the area through dialogues and diplomacy. We urge all claimant-countries to seriously consider our proposal to transform the area from a zone of dispute into a Zone of Peace, Freedom, Friendship and Cooperation (ZoPFF/C),” the DFA said.

In introducing the resolution, Webb said it is now time for the US to “back (its) policy with action.”

Some background to this sea, island and reef dispute and that map that appears above at China: "The Cow's Tongue" and the links therein.
Posted by Mark Tempest at 7/05/2011 07:05:00 AM