Recent Attacks on Shipping (to 4 July 11)

Rough sea conditions in their main operating areas, along with the presence of naval forces and armed security guards on some merchant ships, have slowed the Somali pirates somewhat, however, there is still a whole lot of pirate-like activity around the world, as seen in the reports below.

and more information from the Anti-Shipping Activity Messages


Date of Occurrence: 06/26/2011 Reference Number: 2011-310 Geographical Subregion: 62 Geographical Location: 21° 42' 00" N 60° 29' 00" E Aggressor: PIRATES Victim: BULK CARRIER Description: RAS AL HADD, OMAN: Two skiffs with five pirates in each chased a bulk carrier underway. The pirates fired rpgs at the vessel. The pirates managed to hook on the ladder onto the ships rail however due to evasive maneuvers and using sea and swell to advantage coupled with razor wire and response from coalition navies the pirates aborted the attempt and moved away. A grey hulled mother vessel approximately 40 meters in length was reported in the vicinity.

Date of Occurrence: 06/24/2011 Reference Number: 2011-309 Geographical Subregion: 57 Geographical Location: 6° 08' 35" N 2° 28' 16" E Aggressor: PIRATES Victim: MERCHANT VESSEL Description: 12 MILES OFF COTONOU, BENIN: Four robbers in a speed boat boarded the vessel. All crew went into the citadel, but robbers managed to capture the 2nd engineer before he could enter the citadel. Seeing this, the Master presented himself to the robbers as well. The robbers took the Master and 2nd engineer and stole ship's and crew's cash. Personal belongings were taken, during this time the Master and the 2nd engineer were also hit by the robbers. Port control was contacted but received no response. At the time of the incident the vessel was undergoing STS operations and had to remove the razor wire to enable smooth operations. The robbers took advantage of this and gained access to the vessel.

Date of Occurrence: 06/24/2011 Reference Number: 2011-308 Geographical Subregion: 57 Geographical Location: 6° 15' 54" N 2° 33' 24" E Aggressor: PIRATES Victim: TANKER Description: COTONOU ANCHORAGE, BENIN: About ten robbers armed with guns and knives in a speed boat were seen approaching an anchored tanker with STS fenders alongside. Duty officer raised alarm, activated the SSAS and called port control but received no response. Four robbers boarded the tanker via the STS fenders, entered the bridge and took the Master to his cabin and stole ship's cash and personal belongings. Later the duty officer was taken to his cabin as well as all the other crew cabins and stole crew personal belongings. At this time the crew were threatened. Some crew were also beaten. All the robbers left the tanker at 0330 local time. Port control was called again but there still was no answer.


Date of Occurrence: 06/23/2011 Reference Number: 2011-302 Geographical Subregion: 57 Geographical Location: 5° 52' 00" S 13° 24' 43" E Aggressor: PIRATES Victim: REFRIGERATED CARGO SHIP Description: MATADI ANCHORAGE, DEMOCRATIC REPUBLIC OF CONGO: Robbers boarded and stole ship stores from an anchored refrigerated cargo vessel on three occasions between 0500 local and 0740 local time. Duty crew spotted the robbers and raised the alarm on each occasion resulting in the robbers jumping overboard and escaping in a waiting boat. No response received from port authority when called on VHF. [Note by E1: Interesting as it appears to be a river attack]

For those of you unfamiliar with it, ReCAAP is The Regional Cooperation Agreement on Combating Piracy and Armed Robbery against Ships in Asia, an international agreement (and organization) devoted to fighting piracy in the Malacca Strait and other parts of the South Asian waters. Since its implementation, piracy in the area has decreased. ReCAAP keeps a watchful eye on the South China Sea, too, and recently, in a Special Report dated 29 June 11 (pdf download) that notes an apparent pattern of hijacking ocean going tugs:


5. A total of 11 incidents of hijacking and missing vessels were reported between 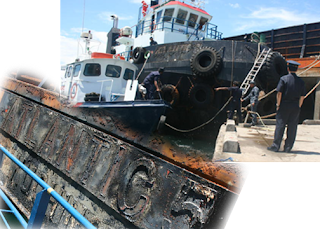 2008 and 2011, comprising two incidents in 2008, one incident in 2009, three incidents in 2010 and five incidents in 2011 (up to June 2011).
6. Except for the incident involving tanker Blue Ocean 7 on 21 May 08, all the other 10 incidents involved tug boats. Tug boats are vulnerable targets as they tend to operate nearer to coast (on coastal voyages), slow moving, with low free board and less crew onboard.

The report goes on to analyze the patterns, report the economic basis for the hijackings (newer boats preferred to old because they sell for more), suggest tug boat security rules and it has maps detailing the prime attack areas. Interesting read.

The 1 July thwarted attack set out  in red above appears to fall into this pattern of criminality.