Lately, capturing ships at sea and holding the crews and ships for ransom is not the only line of business the Somali pirates pursue.

They now have taken that threatening the hostages they hold to influence the governmental policy of the nations fighting the pirates. See Somali Pirates Demand Compensation from South Korea :


A South Korean captain who is being held by Somali pirates says his captors are demanding that the South Korean government pay them compensation for pirates killed by its navy.

Captain Pak Hyeon contacted VOA by phone Friday, saying the pirates want Seoul to pay compensation for eight dead comrades and release another five held prisoner. He said the pirates have not named a price.

This is not the first threat of retaliation against the South Koreans. Back in January 2011, there was this:


Somali pirates threatened yesterday to kill any South Korean seamen they took hostage, in revenge for the killing of eight pirates by South Korean troops who stormed a hijacked vessel.

The claim for money in reparations for pirates killed by naval forces is simply an extension of that threat, as the implied threat is "pay up or else."


A pirate in Somalia threatened Indian sailors and the government with targeted attacks in retaliation for the arrests.
***

A self-described pirate in Somalia who gave his name as Bile Hussein said the arrests will lead to "trouble" for Indian sailors and ships.

As the Somali pirates and their management begin to attempt to influence the policies of the governments that take action against their depredations, the pirates are sliding rapidly from illegal businesses that funnel some money to terrorist organizations into flat out maritime terrorist entities albeit of a semi-commercial nature.

After all, the basic definition of terrorism is "the use of violence and threats to intimidate or coerce, especially for political purposes." 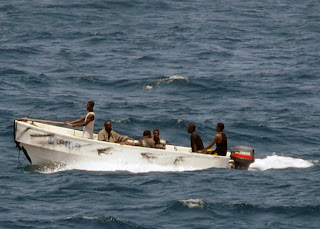 The "political purpose" of the pirates? To be left alone to ply their trade without the threat of violence against them.

Of course, some of the lame justifications previously offered by the pirates for their actions also reach the "terrorist" threshold.

What next? A demand that armed guards be removed from merchant ships "or else hostages will die?" A demand that the escort navies withdraw? A demand for payments of tribute?