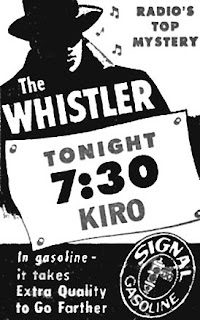 One of the most famous radio shows of its era, The Whistler:


A character known only as the Whistler was the host and narrator of the tales, which focused on crime and fate. He often commented directly upon the action in the manner of a Greek chorus, taunting the characters, guilty or innocent, from an omniscient perspective. The stories followed a formula in which a person's criminal acts were typically undone either by an overlooked but important detail or by the criminal's own stupidity. An ironic ending, often grim, was a key feature of each episode. But on rare occasions, the plot's twist of fate caused the story to end happily for the protagonist.