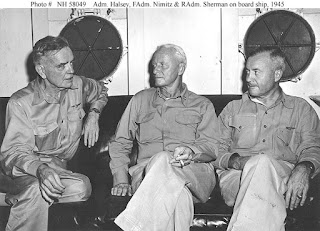 There's a really interesting guest blog post over at Ask the Skipper concerning the Navy's never-ending talent hunt. This one, written by LCDR Jindrich, "Talent Flight: Real, or Just a Myth?" hits on a topic addressed on Midrats a couple of time (Episode 221: Officer Retention with VADM Bill Moran & CDR Guy Snodgrass and )Episode 277: Manpower, Modernization, and Motivation – an Hour with VADM Moran) - that topic being "how the Navy retain the best officers to meet its needs in the future?"

For those of you unfamiliar with the Navy promotion process, it is driven heavily by the "fitness report" or "fitrep" process by which officers are ranked against their peers. With going into great detail the theory is that the #1 Lieutenant assigned to a unit will be so ranked against all Lieutenants assigned to that unit. Being #1 is vital to future success as it drives subsequent assignments, including to command. Such decisions are made by various selection boards who screen the records of all officers coming before them for promotion or department head selection or command - and it's easier screening #1's into jobs that trying to decide if a solid #2 performer is good enough.

Obviously, even with the various games commanding officers can play with rankings (and there are games that can be played), someone will end up #1 when it counts.

But - does past performance really mean that they are the officers we need for the future? Are we really get the best?

LCDR Jindrich asks a really vital question in his post


. . . I believe talent goes deeper than a FITREP ranking. The Navy needs to take a hard look at what it says it values, what it truly values, and how that is reflected through promotions. A robust public discourse on this topic would be a good start.

Then what is needed is an analysis of all officers, from the CNO on down, and see which part of the talent sandwich we’re truly promoting from. There are many ways to go about this. Idea’s range from focusing on a specific cohort of officers, such as an already established promotion zone, and look back to see who promoted, who left voluntarily, and what their performance was. If possible, this should include an analysis of their performance in civilian jobs for those that left the service.

Other options include focusing on historical board results, both statutory and administrative, to see if we are promoting and keeping our talent. But again the main focus must be emphasized not just on those who stayed, but on those who opted out of service – a group often left out of this conversation. Much of this should be easy if given the requisite time and access. There is an entire library of records in Millington, TN.

I urge the Chief of Naval Personnel to seriously consider a study of this nature (read: not a survey). In order to create solutions to problems, we need to first get a grip on what exactly we mean by talent and then challenge the initial question– which is: Is the Navy in fact truly losing it’s best and brightest? . . .

The Chief of Naval Personnel has opened the door, I believe, to really looking into that question.

Why does it matter? Well, if you are a tax payer, you should want the Navy to keep the officers it needs to fulfill its mission in the most efficient and cost effective manner. Which usually means having the right person in the right job at the right time.

That may mean that we will need to stop promoting people out of jobs that they do really well into jobs that ill suit them.