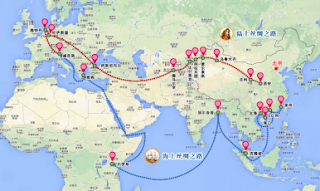 China's plan to blast open more of the Mekong River for bigger cargo ships could founder on a remote outcrop of half-submerged rocks that Thai protesters have vowed to protect against Beijing's economic expansion in Southeast Asia.

Dynamiting the Pi Long rapids and other sections of the Mekong between Thailand and Laos will harm the environment and bring trade advantages only to China, the protesters say.

"This will be the death of the Mekong," said Niwat Roykaew, chairman of the Rak Chiang Khong Conservation Group, which is campaigning against the project. "You'll never be able to revive it."

Such opposition reflects a wider challenge to China's ambitious "One Belt, One Road" project to build a modern-day Silk Road through Asia to Europe.
***
The Mekong River originates in the Tibetan plateau and cascades through China and five Southeast Asian countries.

China has built a series of dams along its stretch of the river that Thai campaigners say has impacted the water flow and made the regional giant hard to trust.

You can read that "modern-day Silk Road" stuff as China seeking routes around its "first island chain" problems and sea lines of communication issues in addition to seeking new markets for Chinese made goods.

China seems convinced that problems can be ironed out if enough money is thrown into the project.

Backgrounder from the Council on Foreign Relation on the "new Silk Road" - Building the New Silk Road:


China has multiple reasons for pursuing the New Silk Road. Xi has promoted a vision of a more assertive China, while the "new normal" of slowing growth puts pressure on the country’s leadership to open new markets for its consumer goods and excess industrial capacity. Promoting economic development in the troubled western province of Xinjiang, where separatist violence has been on the upswing, is another major concern, as is securing long-term energy supplies.

China's strategy is conceived as a two-pronged effort. The first focuses on overland infrastructure development through Central Asia—the "Silk Road Economic Belt"—while the second foresees the expansion of maritime shipping routes through the Indian Ocean and the Persian Gulf—the "Maritime Silk Road."
***
In 2013, Xi told an audience in Kazakhstan that he wants to create a vast network of railways, energy pipelines, highways, and streamlined border crossings, both westward—through the mountainous former Soviet republics—and southward, toward Pakistan, India, and the rest of Southeast Asia. Such a network would also expand the international use of Chinese currency, the renminbi, in transactions throughout the region, while new infrastructure could "break the bottleneck in Asian connectivity," according to Xi. The Asian Development Bank, highlighting the need for more such investments, estimates that the region faces a yearly infrastructure financing shortfall of nearly $800 billion.

Xi subsequently announced plans for the maritime silk road at the 2013 summit of the Association of Southeast Asian Nations (ASEAN) in Indonesia. To accommodate expanding maritime trade traffic, China will invest in port development throughout the Indian Ocean, in Bangladesh, Sri Lanka, the Maldives, and Pakistan.

And a look at the expensive project from Joshua Eisenman and Devin Stewart at Foreign Plolicy China’s New Silk Road Is Getting Muddy:


But rather than hand-wringing over TPP’s ignominious failure, Asia watchers should turn their attention to China’s unprecedented $1 trillion strategic gambit: the Silk Road Economic Belt and the 21st-Century Maritime Silk Road, aka “One Belt, One Road” (OBOR). Launched in 2013 as President Xi Jinping’s signature initiative, OBOR holds great promise, as well as potential pitfalls, for both China and its neighbors.

OBOR is a game-changing plan to bring about the next stage of globalization, a Sinocentric vision that harks back to the ancient Silk Roads — but this time on Beijing’s terms. The goal is to create a new economic “belt” of connective infrastructure westward into Eurasia and a new maritime “road” connecting China to Southeast Asia, South Asia, the Middle East, and Africa. Examples of OBOR projects include a railway linking China to Laos and another one through Mongolia and Kazakhstan; gas and oil pipelines through Turkmenistan and Myanmar; road and port development in Sri Lanka; and the cornerstone $46 billion China-Pakistan Economic Corridor (CPEC), which encompasses highways, pipelines, coal-based electricity generation, and the Chinese-operated Gwadar port.
OBOR is primarily a “build it and they will come” initiative. Rather than improving the host country’s industrial or productive capacity, it expands and strengthens transportation and energy arteries, including ports, rails, communications, electricity, and pipelines. It promises to stimulate the ailing Chinese economy in the short and medium terms through construction and telecoms contracts and capital goods provision while in the long term opening new trade routes so Chinese products can fill store shelves in OBOR countries for decades to come.
***
OBOR presents significant domestic economic and political risks for China. There is real tension between the Chinese government’s drive to invest in riskier developing countries via OBOR and private capital’s flight to safety amid a domestic economic slowdown and growing protectionist fears. Just as Beijing is pushing OBOR on its state-owned enterprises, private Chinese investors are finding ever more ingenious ways to offshore their resources in safer assets, particularly U.S. real estate. Beijing has responded with increasingly pervasive capital controls, but technology has made these difficult to enforce.

More than a decade ago, the United States called on China to be a “responsible stakeholder,” both in its neighborhood and beyond. The years since have seen the rise of a new, and increasingly assertive, Chinese foreign policy. OBOR is a big part of Beijing’s new approach and a potential harbinger for a new stage of Sinocentric globalization. It is a grand vision with wide-reaching political consequences both at home and abroad. If it succeeds, China will become the unquestioned Eurasian hegemon. But Beijing’s efforts likewise carry enormous economic and political risks that Chinese policymakers know they must mitigate if President Xi’s initiative is to live up to its billing. The question is whether OBOR can overcome the logistical, political, security, and financial challenges identified above — or be thwarted by them, losing hundreds of billions of dollars and creating a slew of disgruntled debtor neighbors with landscapes scarred by white-elephant projects. Only time will tell.


Below these surface level gains, Beijing hopes the land based Silk Road Economic Belt will lessen China’s dependence on South East Asian shipping lanes for access to energy and raw materials from the Middle East and Africa. Beijing knows that these shipping lanes will play a critical role in any U.S. led military strategy towards China.

The China-led Asian Infrastructure Investment Bank (AIIB) will serve as the funding arm of OBOR, which has a projected investment of $1.4 trillion. Spanning from Europe to Australia, 57 countries signed on as Potential Founding Members of the AIIB in September 2015, with Japan and the United States refusing to join.(emphasis added)

From 2015, Anthony Kleven at the Diplomat, Is China's Maritime Silk Road A Military Strategy?:


Did Xi Jinping just acknowledge that the Maritime Silk Road has, in fact, a strong military dimension?

That seems to be the case, following a joint declaration made with his Djibouti counterpart, Ismail Omar Guelleh (IOG), on the sidelines of the Forum on China Africa Cooperation (FOCAC) in Johannesburg. According to Xinhua, the usually guarded Xi welcomed “Djibouti’s participation in developing Beijing-proposed 21st-century Maritime Silk Road in proper ways.”

However, in light of last week’s bombshell that China has chosen this sleepy East African nation to house its first military base, giving such a warm embrace to Djibouti’s “proper” participation in the Maritime Silk Road is, quite frankly, startling.

The Chinese have been reading Mahan:


Mahan was one of the foremost proponents of the “vigorous foreign policy” referred to by Turner. Mahan believed that the U.S. economy would soon be unable to absorb the massive amounts of industrial and commercial goods being produced domestically, and he argued that the United States should seek new markets abroad. What concerned Mahan most was ensuring that the U.S. Government could guarantee access to these new international markets. Securing such access would require three things: a merchant navy, which could carry American products to new markets across the “great highway” of the high seas; an American battleship navy to deter or destroy rival fleets; and a network of naval bases capable of providing fuel and supplies for the enlarged navy, and maintaining open lines of communications between the United States and its new markets.