In light of some of our discussion on Midrats with Christopher Preble (about 37:20), a reminder of why sometimes the road to hell is paved with good intentions and unintended consequences:


The United States Army has a long tradition of humanitarian relief. No 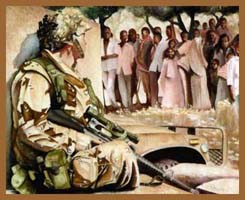 such operation has proven as costly or shocking, however, as that undertaken in Somalia from August 1992 to March 1994. Greeted initially by Somalis happy to be saved from starvation, U.S. troops were slowly drawn into interclan power struggles and ill-defined "nation-building" missions. The American people woke up one day in early October 1993 to news reports of dozens of our soldiers killed or wounded in fierce fighting in the streets of the capital city Mogadishu. These disturbing events of a decade ago have taken on increasing meaning after the horrific attacks of 11 September 2001.


It goes on today: The Department of Defense announced May 6, the death of a U.S. Navy Sailor who was in support of a Somali National Army-led operation with U.S. Africa Command.:


Senior Chief Special Warfare Operator Kyle Milliken, 38, of Falmouth, Maine, was killed during an operation against al-Shabaab May 5 in a remote area approximately 40 miles west of Mogadishu.

"Senior Chief Kyle Milliken embodied the warrior spirit and toughness infused in our very best Navy SEALs. We grieve his death, but we celebrate his life and many accomplishments. He is irreplaceable as a husband, father, son, friend and teammate - and our thoughts and prayers go out to his family and teammates," said Rear Adm. Timothy Szymanski, commander, Naval Special Warfare Command. "His sacrifice is a stark reminder that Naval Special Operators are forward doing their job, confronting terrorism overseas to prevent evil from reaching our shores."