Can't read Twitter today or the past few days without wondering whatever happened to facts.

Not speculation. Not "sources" who won't come forward for cross-examination. Not editorials, not opinion pieces.

Now, as a lawyer it never surprised me that in a trial or a deposition that two 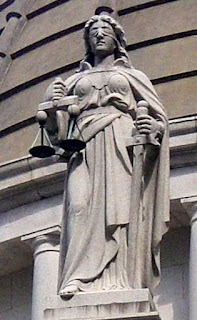 people can look at the same thing and get two different meanings from it. That's why we have juries and judges to decided whether the weight of the evidence offered makes one meaning more likely than another.

Not an uncommon theme in art -see Rashomon effect.

Of course, in the perfect world, reporting would be (as science purports to be) "value free." Hard to do, as studying sociology teaches:


Sociologists should observe value neutrality while conducting social research. It means that he should exclude ideological or non -scientific assumption from research. He should not make evaluative judgment about empirical evidence. Value judgment should be restricted to sociologists' area of technical competence. He should make his own values open and clear and refrain from advocating particular values. Value neutrality enables the social scientists to fulfill the basic value of scientific enquiry that is search for true knowledge. Thus sociology being a science cherishes the goal of value neutrality. According to Alvin Gouldner value-free principle did enhance the autonomy of sociology where it could steadily pursue basic problems rather than journalistically react to passing events and allowed it more freedom to pursue questions uninteresting either to the respectable or to the rebellious. It made sociology freer as Comte had wanted it to be -to pursue all its own theoretical implications. Value free principle did contribute to the intellectual growth and emancipation of the enterprise.Value-free doctrine enhanced freedom from moral compulsiveness; it permitted a partial escape from the parochial prescriptions of the sociologists' local or native culture. Effective internalization of the value-free principle has always encouraged at least a temporary suspension of the moralizing reflexes built into the sociologist by his own society. The value-free doctrine has a paradoxical potentiality; it might enable men to make better value judgments rather than none. It could encourage a habit of mind that might help men in discriminating between their punitive drives and their ethical sentiments. However in practice it has been extremely difficult to fulfill this goal of value neutrality. Values creep in various stages in sociological research. According to Gunnar Myrdal total value neutrality is impossible. 'Chaos does not organize itself into cosmos. We need view points.' Thus in order to carry out social research viewpoints are needed which form the basis of hypothesis which enables the social scientists to collect empirical data. These view-points involve valuations and also while formulating the hypothesis. Thus a sociologist has to be value frank and should make the values which have got incorporated in the choice of the topic of the research of the formulation of hypothesis clear and explicit at the very outset in the research. The value-free doctrine is useful both to those who want to escape from the world and to those who want to escape into it. They think of sociology as a way of getting ahead in the world by providing them with neutral techniques that may be sold on the open market to any buyer. The belief that it is not the business of sociologist to make value judgments is taken by some to mean that the market on which they can vend their skills is unlimited. Some sociologists have had no hesitation about doing market research designed to sell more cigarettes although well aware of the implications of recent cancer research. According to Gouldner the value-free doctrine from Weber's standpoint is an effort to compromise two of the deepest traditions of the western thought, reason and faith but that his arbitration seeks to safeguard the romantic residue in modern man. Like Freud, Weber never really believed in an enduring peace or in a final resolution of this conflict. What he did was to seek a truce through the segregation of the contenders by allowing each to dominate in different spheres of life.


At any rate, Twitter seems to be about as "fact free" as you can get lately. Idle conjecture, ideologically driven "interpretations" of events and total bias are fun, I suppose, but really, I like facts - even those often contradictory facts that need to be weighed carefully by a jury.
Posted by Mark Tempest at 5/17/2017 12:24:00 PM

Email ThisBlogThis!Share to TwitterShare to FacebookShare to Pinterest
Labels: Thoughts