Chuck Hill asks Will the CG Again Arm Icebreakers? Good question. Depends on how we perceive the Russian and Chinese threats in the Arctic.

Interested in "combating terrorism?" Need to visit the Combating Terrorism Center at the USMA site for lots of good info and excellent publications:


Situated at the nexus of theory and practice, the Combating Terrorism Center serves as an important national resource that rigorously studies the terrorist threat and provides policy-relevant research while moving the boundaries of academic knowledge. The CTC’s distinguished scholars, international network of experts, and access to senior U.S. government leadership set it apart from any other like enterprise.

The ICC IMB Live Piracy Map shows where the "bad guys" are operating and Live Piracy Report tells what they've been up to: 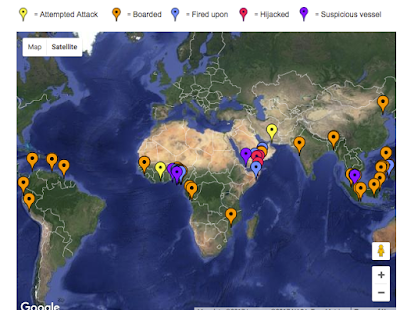 Zones of ineffective law enforcement seem to be part of the pattern. Most incidents are not hijackings and kidnappings, but rather low level theft and robbery, so we've got that going for us.

Speaking of illegal activity, Indonesia Wants Global War on Illegal Fishing. Hello, China! But China is not alone as noted in West Africa loses over $2 billion to illegal fishing because governments don’t talk to each other:


Both international and regional vessels are guilty of contravening existing regulations, Greenpeace found during a ten-week surveillance voyage from February to May. It documented a number of illegal, unregulated, and unreported fishing practices off the coast of Mauritania, Senegal, Cape Verde, Guinea, Guinea-Bissau, and Sierra Leone. After boarding 37 fishing vessels, the group found evidence of infractions like illegal shark finning, possession of incorrect net mesh sizes, and fishing without licenses or outside of permit areas. These illegal activities were carried out by vessels with Chinese, Italian, Korean, Comoros, and Senegalese flags.


Spanish member of the European Parliament (MEP) Josefa Andrés Barea said the subsidized foreign fishing licenses are vital. When Spain entered the EU in 1986, very few Spanish vessels were allowed in the Union’s waters. So fishing in foreign waters was — and still is — the only way for many ship owners to make a living. And if Spain isn’t fishing, she said, less savory global players will scoop up the catch instead.

"There's a fundamental problem here which is that major [fishing] powers like China will be there if we're not. And they don't have any rules,” Andrés said. “They're much more predatory than we are."

Sort of weak argument, isn't it? "If I don't rob you first, a worse thug might get you instead . . ." Part of the outrage is that the Spanish fleet, like the Chinese is heavily subsidized.


Nigeria is hoping that OPEC will extend the oil production cut deal for the rest of 2017 as the challenge from U.S. shale is showing no signs of subsiding, according to the country’s Oil Minister Emmanuel Ibe Kachukwu. Kachikwu admitted that U.S. shale is OPEC’s biggest problem as production can be cut or boosted in a short time in response to changing market conditions, unlike conventional oil projects.

It’s worth recalling how two months ago, Reuters quoted sources as saying that two senior Saudi energy officials held closed-door talks with some of the biggest shale producers in the U.S., warning them OPEC would not extend the production cut deal to offset their growing output. Apparently, things have changed since then because an extension is near a foregone conclusion.
***
Speaking to media at the offshore Technology Conference, Kachikwu hinted that a policy initiative aimed at curbing shale output, or an agreement within the industry would help OPEC’s efforts. The likelihood of either of these happening is remote, particularly not with a President whose top priority is energy independence and not with an private shale oil industry that has suffered its fair share as a result of what some see as a price war initiated by Saudi Arabia and its allies and others see as a desperate attempt on the part of some OPEC producers to conceal their dwindling supplies.

Heh. Energy independence for the U.S. means it's a buyer's market.

Update: The Saudis are whining,too. See Saudi Arabia Whines US Has Too Much Control Over World’s Oil. Have I mentioned I get some pension money from a couple of U.S. energy companies? Well, I do.

Email ThisBlogThis!Share to TwitterShare to FacebookShare to Pinterest
Labels: Things to Consider, Things to Read