Well, a paranoid government blaming its sucky economy on pretty much everyone else reaches down into the barrael of crazy and blames "Somali pirates" and their alleged sponsors. Really. From the "Mehr News Agency" Certain powers funding Somalia pirates to undermine Iran economy" 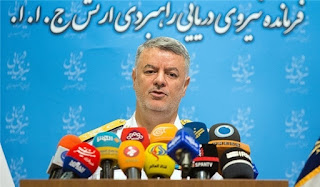 in 2007 by proxy in a bid to undermine the Islamic Republic’s economy.
Navy Commander Rear Admiral Hossein Khanzadi made the remark on Sunday in a welcoming ceremony for the return of the 49th fleet after 67 days of voyage on open seas, adding “there was a tremendous attempt at depicting the presence of piracy off the coast of Somalia as something natural, but the acts of piracy reveal certain coordinators and perpetrators behind this new phenomenon in the 21st century.”

Khanzadi went on to add that certain powers are supplying Somalia pirates with intelligence and equipment, and funding them in a bid to undermine the economy of the Islamic Republic of Iran.

The Iranian Navy has been conducting anti-piracy patrols in the Gulf of Aden since November 2008 to safeguard the vessels involved in maritime trade, especially the ships and oil tankers owned or leased by Iran.

Too bad the secret is out now, since Somali piracy  has been heavily supressed by "certain powers" including NATO, the EU, China, Japan, the U. S., Denmark, Germany, the UK, India, France, and many other countries that have contributed ships, aircraft and personnel to supress the pirates. Not to mention the effect of shipping using private security teams. What a clever plan that involves all those entities spending their national assests and treasure to secure the sea lines of communication that Iran needs to use to market its oil and gas.

Well, I guess it's a refreshing change from their usual misrepresentations about their Navy's success in fighting Somali pirates through its "flotillas."
Posted by Mark Tempest at 1/09/2018 12:20:00 PM