Reported as Ukraine Threatens to Block Russian Shipping on the Danube 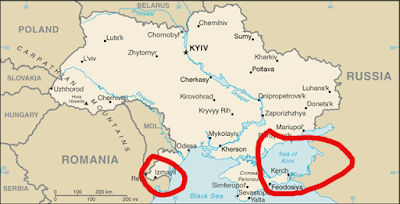 Yury Lavrenyuk, Ukraine’s deputy infrastructure minister, announced that his agency had “appealed to the National Security and Defense Council regarding the prohibition of the entrance of Russian ships into the domestic waterways of Ukraine because of the high level of terrorist threats” such ships allegedly present. Allowing such ships to pass, he said “is impermissible” because there is “critical infrastructure” along such waterways. His words drew support from other Ukrainian ministries and agencies.
****
In response to Moscow’s threat to bottle up Ukrainian shipping within the shared Azov Sea, the Ukrainian government is currently considering a plan to block Russia’s use of the Danube River. Ukraine’s infrastructure ministry has proposed closing to all Russian shipping the canal in the extreme southeast border region of Ukraine, which vessels use to pass the Danube delta, from the Black Sea to the upstream Danube proper. Such an action would affect relatively small numbers of ships. Nonetheless, Russian officials are clearly worried it could reduce their ability to supply countries in the Balkans. At present, however, the possibility of such a ban is only a threat. And it is likely part of a complex implicit negotiation between Kyiv and Moscow about free passage through the Kerch Strait, across which Russia is building a bridge to occupied Crimea (see EDM, February 12, 22), and about the use of ports in that occupied Ukrainian peninsula by Russian shipping.


From Moscow’s point of view, its loss of control over much of the Black Sea littoral and ports as a result of the disintegration of the Soviet Union is a serious problem, one that Russian moves first in Abkhazia and then in Crimea were intended to help solve. Indeed, even before the Crimean annexation in 2014, Russian commentators talked about depriving Ukraine of its access to the sea by creating a new “Novorossiya” state that would extend to the borders of Moldova and possibly even include Transnistria .... Now, in the wake of Ukraine’s seizure of two vessels for violating its territorial waters (see below), Moscow officials are openly suggesting that the Russian Navy could limit or even block the transit of Ukrainian ships, civilian and military, through the Kerch Straits. This would effectively make the Sea of Azov an internal Russian waterway, something officials in Moscow had hinted at in the past, in discussions about the supposed need to defend President Vladimir Putin’s Crimea bridge from attack ..
****
On March 25, the Ukrainian border guard service detained the Russian-flagged fishing vessel Nord, which was operating in Ukrainian waters, in the Sea of Azov. The boat, registered in Crimea, and its ten crew members were escorted to the Azov Sea port of Berdiansk (Dpsu.gov.ua, March 26). They are currently awaiting trial in Ukraine. Then, on April 10, Ukrainian authorities arrested a Russian dredger ship, temporarily docked in the Odessa-region port of Yuzhny, for allegedly carrying out illegal sand extraction works in occupied Crimea (TASS, April 10).

So much fun, so much positioning.