"A Fleet Must Be Able to Fight"

A Fleet Must Be Able to Fight by Admiral Scott Swift is a need to read look into the the thinking of the Commander of the U. S. Pacific Fleet on preparing to fight a fleet. 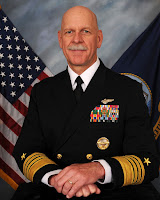 A fleet is the Navy’s essential fighting element, our central contribution to the joint fight and to the nation’s defense. Forming a fleet into a coherent fighting organization brings an inherently integrated multi-domain warfighting structure. The natural synergies enjoyed by the surface, subsurface, and air domains are obvious and speak to our current day-to-day warfighting organization. Deliberate inclusion of the organic Fleet Marine Force and Naval Expeditionary Combat Command expeditionary capabilities enhance the fleet organization into one that can fight a highly mobile, maneuver-focused naval campaign sustained in austere locations over time. As we contemplate peer-level maritime adversaries, we need to recall the Navy’s foundational strength and resiliency. In response, we have focused the Pacific Fleet into full-spectrum and multi-domain numbered fleets within theater-level warfighting organizations capable of overmatching any adversary. Careful focus at the operational level of war is necessary to craft and wield this force


But after what will be five years in command of two fleets, I find myself making similar observations as Admiral Willard: There is no classroom instruction and little doctrine or guidance for fighting a fleet.

The article then lays out Admiral Swift's observations on "...the fleet as a combat formation."

It has been about 73 years since the U. S. Navy fought as fleets. Admiral Swift's thoughts are timely indeed.

Email ThisBlogThis!Share to TwitterShare to FacebookShare to Pinterest
Labels: Fighting the Fleet, Naval Strategy, The Modern Fleet, US Navy