Warning Shot: "[T}he rapid depletion of the U.S. commercial fleet size" and a shortage of civilian mariners as threat to National Security 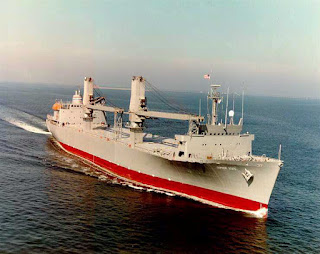 The unique role of the U.S. Merchant Marine in peace and war remains grossly misunderstood by the public at large. The industry’s role during every crisis the nation has faced since its founding days is well documented, but it is either rarely recognized or often forgotten by the citizenry. Its increasingly vital national security role remains a complete enigma to the populace. That part of the Merchant Marine mission and its strategic role in global force projection, along with the maintenance of national security interests worldwide, must become much more widely known and recognized.


The need for a U.S. merchant marine “capable of serving as a naval and military auxiliary in time of war or national emergency” was further emphasized in the Merchant Marine Act of 1936, and later in the National Security Directive 28 implemented on 28 October 1989. To fulfill this mandate, 61 commercial ships are maintained on five-day readiness status by a skeleton crew at the behest of the U.S. Transportation Command through the Maritime Administration (MarAd) and the Military Sealift Command.  These vessels constitute the logistics backbone for troop mobilization and force projection.
***
Losing from the current fleet any more than two commercial ships and the mariners they employ will impact significantly the Ready Reserve Force’s (RRF’s) capability. Given the voluntary nature of mariner services and the likelihood of all future mobilizations being in a contested and hazardous operating environment, the assumption that all qualified mariners will report when called upon is simply unrealistic. A recent report to Congress identified the need for 13,607 qualified mariners for sustaining the mobilization and commercial operations concurrently under highly optimistic assumptions of no loss of life or property. The identified pool of mariners will therefore provide three to four months of force projection support at best, taking into account the necessary crew rotations.


The MWWG estimates that 11,768 qualified mariners with unlimited credentials as described above are available to crew the Ready Reserve Force. The number of mariners required to activate the entire
surge fleet as well as operate the commercial fleet concurrently is 11,678 and is documented within this Report. Thus, MWWG estimates that there are sufficient mariners working in the industry to activate the surge fleet if the entire pool of qualified United States citizen mariners identified by MWWG are available and willing to sail when required. This assumption is of paramount importance given the
voluntary nature of mariner service. Should the need for mariner services be prolonged through concurrent sustained sealift and commercial fleet operations, it will necessitate crew rotations and
accordingly, increased demand for additional qualified mariners from the identified subset. Currently the estimated demand for mariners with unlimited credentials under such operating conditions is
13,607. Thus, the Report documents a deficit of mariners with unlimited credentials to meet the national security and force projection needs. The deficit will escalate if actively sailing qualified mariners
from the identified base are unable or unwilling to continue sailing during times of national emergency. It is to be noted that the willingness to sail either commercially or as part of the surge sealift fleet during such times is presently unknown and beyond measurement . . .

Well worth the read, and something to talk to your elected representatives about.

For those of you interested in such matters, a USNI membership is vital. An "online" membership is only $39 a year, and you can find info here.