“The very purpose of the [Chinese Communist] Party in leading the people in revolution and development,” Xi Jinping explained to an audience of party cadres in 2012, “is to make the people prosperous, the country strong, and rejuvenate the Chinese nation.” This “rejuvenation” of the Chinese people, which might also be translated as their “revival” or “restoration,” reflects a specific understanding of Chinese history and China’s proper place in world affairs. Chinese of all political persuasions are acutely aware that China was once the standard setter in advanced civilization, the center point around which the economies and cultures of much of the Earth revolved. For many Chinese nationalists, the last two centuries have been a painful aberration from this natural order. The party labels the years that China was exploited by imperialists and divided by warlords “the century of humiliation,” a century that ended only when they took control. The century that followed—which comes to its end 29 years from now, in 2049—is different. This will be the century that makes China great again.

“The rejuvenation of the Chinese people” has been officially endorsed as the “historical mission” of the Communist Party since 1987 but it is an old dream whose origins predate the party’s founding. In the early 20th century Chinese intellectuals searched for a way to “save China,” modernize it, and restore it to the preeminence that the world’s largest civilization deserved. What made the later communists different from other Chinese modernizers was the solution they endorsed. As their sloganeering went: “Only socialism can save China.” The slogan is still in use, though Xi and other 21st-century Communists add a second clause: “Only socialism can save China, and only socialism can develop China.”
***
Westerners asked to think about competition with China—a minority until fairly recently, as many envisioned a China liberalized by economic integration—tend to see it through a geopolitical or military lens. But Chinese communists believe that the greatest threat to the security of their party, the stability of their country, and China’s return to its rightful place at the center of human civilization, is ideological. They are not fond of the military machines United States Pacific Command has arrayed against them, but what spooks them more than American weapons and soldiers are ideas—hostile ideas they believe America has embedded in the discourse and institutions of the existing global order. “International hostile forces [seek to] westernize and divide China” warned former CPC General Secretary Jiang Zemin more than a decade ago, and that means that, as Jiang argued in a second speech, the “old international political and economic order” created by these forces “has to be changed fundamentally” to safeguard China’s rejuvenation. Xi Jinping has endorsed this view, arguing that “since the end of the Cold War countries affected by Western values have been torn apart by war or afflicted with chaos. If we tailor our practices to Western values ... The consequences will be devastating.”

Dean Cheng of Heritage discussed this with us on Midrats:
Listen to "Episode 541: Post COVID-19 China, with Dean Cheng" on Spreaker.

China, as discussed during the show, by hook or crook, has embedded puppets in positions to attack the existing global order. Not by forces of arms, but by stealth. Dean made reference at one point in the show to John Kennedy's thesis While England Slept and Sal made a reference to the "boiling frog" fable. By slowly making changes, all minor in themselves, the Chinese insert their "way" into the world order.

The Chinese are big on winning without fighting and presenting the world with their form of fait accompli. See Sun Tzu: 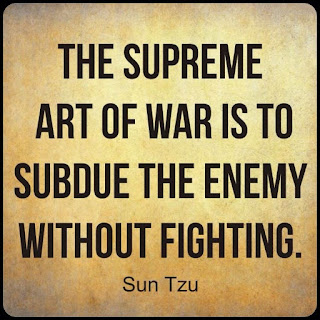 Dean's For the Chinese, Political Warfare Is War by Other Mean is an excellent primer on China's approach. Dean also has noted that China has an advantage in that it's minions do not sent "mixed messages" when bullying pushing their agenda. They may lie, cheat, and steal to get what they want, but it allis driven by the top of their political food chain.

The West, being free, has, thank goodness, many voices and many opinions. The Chinese hate that and offer their "way" as an alternative. But remember China's government greatly fears the disorder of free ideas and seeks to stifle them in the name of "safety" for its subjects. Our founders saw the risk in such thinking:

He who gives his freedom for safety gets none of them.

Email ThisBlogThis!Share to TwitterShare to FacebookShare to Pinterest
Labels: The War with China