Finding the Delta - Given an expectation that there are always going to be a certain number of deaths in any given month, how much has COVID-19 increased that number?

If I ask "Given an expectation that there are always going to be a certain number of deaths in any given month, how much has COVID-19 increased that number?, I am looking for the difference (the"delta") between the predicted number of deaths in a given month and any any increase over that prediction that can be attributed to COVID-19. The National Vital Statistics System, a part of the CDC, actually prepares such a report that displays that information, the Provisional Death Counts for Coronavirus Disease (COVID-19). In the the notes concerning this report this one explains the term "expected deaths" as used in the table:


Percent of expected deaths is the number of deaths for all causes for this week in 2020 compared to the average number across the same week in 2017–2019. 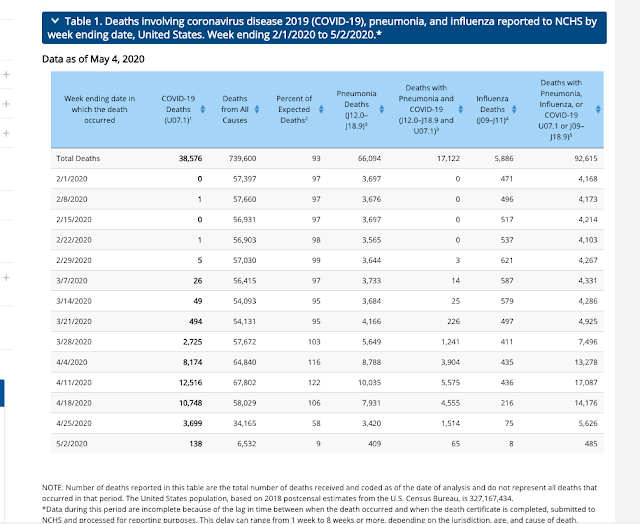 This is represented graphically:

In either the chart or the graph, you'll note that April 2020 was the month in which "excess deaths" above expected levels took off.

If you take a look at the numbers for some key states, you will see where that spike came from: New York City had a death rate 215% higher than the expected. As a state, New York was 118% higher. New Jersey was 129%, a couple of other states were over a percentage or 2 above "expected" - some were much lower.

Some the lower numbers are undoubtedly due to the lag in reporting. Or as set out on the linked page:


NOTE: Number of deaths reported in this table are the total number of deaths received and coded as of the date of analysis and do not represent all deaths that occurred in that period. The United States population, based on 2018 postcensal estimates from the U.S. Census Bureau, is 327,167,434.

*Data during this period are incomplete because of the lag in time between when the death occurred and when the death certificate is completed, submitted to NCHS and processed for reporting purposes. This delay can range from 1 week to 8 weeks or more, depending on the jurisdiction, age, and cause of death.

What's the lesson? We are capturing the increases in deaths above those that would be normally expected. Overall, the increases in most states would not appear to be that great except for New York City and, thus, New York State, and, perhaps, New Jersey.

Of course, these numbers are "provisional" and will be adjusted up and down as more data is received. For example, the state chart shows North Carolina with no COVID-19 deaths, the NC government is reporting 420 deaths from COVID-19 as of 4 May 2020. Be aware of GIGO.
Posted by Mark Tempest at 5/05/2020 07:00:00 AM

Email ThisBlogThis!Share to TwitterShare to FacebookShare to Pinterest
Labels: COVID19