Oman’s ambitious goal of building the biggest oil-storage facility in the Middle East is finally progressing, more than seven years after the Gulf sultanate announced the plan.
Oman Tank Terminal Co. has almost finished constructing eight tanks to store crude for a new refinery near the town of Duqm on the Arabian Sea. It’s now pushing ahead with others that could be used by oil companies and traders, according to two people with knowledge of the project. That would eventually increase Duqm’s capacity to at least 25 million barrels, according to OTTCO’s website.
The Ras Markaz Crude Oil Park could provide an alternative for energy traders and exporters eager to avoid the Strait of Hormuz, a choke-point at the mouth of the Persian Gulf that’s seen numerous flareups in recent years, including Iranian seizures of tankers. The Omani facility lies roughly 600 miles (966 kilometers) from the waterway. The United Arab Emirates port of Fujairah, the region’s largest hub with 14 million barrels of commercial crude-storage capacity, is less than 100 miles from Hormuz.
“Crude storage that anybody can use outside the Strait of Hormuz, that can go either east or west, is probably a good thing,” said Alan Gelder, vice president for refining, chemicals and oil markets at consultant Wood Mackenzie Ltd. Iraq and Kuwait, a co-investor in the refinery, might see Duqm as an attractive place to park their crude outside the Gulf, he said.

Of course, Iran's fallback is to use its proxy Houit rebels in Yemen to clog up the Bab al Mandeb chokepoint and the lower end of the Red Sea to screw up shipping through the Suez Canal. OTTC info here:


Ras Markaz Crude Oil Park The first phase of the Ras Markaz Crude Oil Park will be operational in 2021, and will feature storage tanks of different sizes. The total capacity of Phase 01 will be up to 25 million barrels of crude oil of which Duqm Refinery will build and utilize approximately 6 million barrels. The tank storage terminal will feature offshore loading and unloading facilities to cater to Suezmax and VLCC tankers via Single Point Moorings. The terminal will be connected via a 70km pipeline to the Duqm Refinery and a potential of connecting to Oman's Main Oil Pipeline at Nahada 440km away. 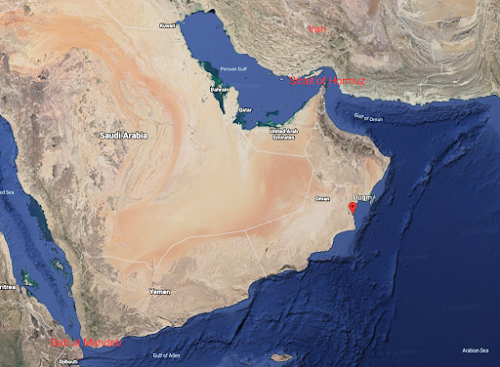