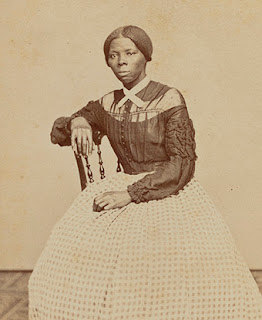 A little more information on the courageous Ms. Tubman here and here:


Harriet Tubman is perhaps the most well-known of all the Underground Railroad's "conductors." During a ten-year span she made 19 trips into the South and escorted over 300 slaves to freedom. And, as she once proudly pointed out to Frederick Douglass, in all of her journeys she "never lost a single passenger."

And, some background on the "Destination Freedom" radio program here:

The show was the brainchild of African-American journalist and author Richard Durham. In cooperation with The Chicago Defender, he began this series over NBC Chicago outlet WMAQ in July 1948, with scripts emphasizing the progress of African-Americans from the days of slavery to the ongoing struggle for racial justice. Airing in Sunday-morning public-service time, the series built a steady audience in the Midwest with inspirational stories of social progress, earning strong support from Civil Rights organizations, and offering employment to a wide range of African-American performers.