My good friend CDR Salamander weighs in on the aircraft carrier debate on his home blog With Carriers: Go Smaller to get Bigger? which visits the ongoing discussions of Jerry Hendrix and Bryan McGrath about the future of the Navy force, especially aircraft carriers

Both of these gentlemen are stout in their views and their views are well worth discussing. You may find Jerry Hendrix's latest salvo in National Review The Aircraft Carrier We Need and Bryan McGrath's counter-fire on Twitter here. Big deck, small deck, proper air wing configuration, number of hulls, etc. CDR S tends to side with numbers, his view is that too big, too expensive means too much to risk and too easy to lose too much capacity with one lucky torpedo, missile, or accident.

It's a good debate and it's fun to ponder such things. However, I think it's the wrong debate.

I agree with Sal that we have perfected a myopic view of fleet equipment which holds that economies of scale dominate. "Bigger is better because on a per ship basis, it's cheaper to have one great big asset instead of smaller, 'less efficient' sized ships." You see this when you go to the grocery store - the large economy size bottle provides lower cost per ounce and may be the better buy.

The debate assumes that the aircraft carrier remains the premier weapon platform of our Navy. For almost 80 years that has been the aviator's mantra. They justify this view by noting that for almost 80 years the first question in a crisis has been, "Where are our carriers?"

What if that assumption is incorrect? What if, as submariners and others have been saying, the carrier is no longer the "king of the sea?"

What if our potential adversaries have taken a look at our reliance on carriers and designed their own counter forces to stop us from using our carriers and we might wish to? Oh, wait - they have done just that. Part of the carrier debate is that our current carrier aircraft lack the range to penetrate the "anti-access/area denial (A2AD)" areas covered by "ship killer" ballistic missiles and other land-based weapons that are specially designed to keep our carriers at bay and actively kill them. Naval literature, both in fiction and in professional journals is full of discussion of this

I have argued before for making the effort to "spread lethality" by using many smaller ships all armed to the teeth, and for the creative use of things like missile barges Let's Have "Missile Barges" (and More) Now.


We must stop tying ourselves to large, easily targetable units and move to a force that is dispersed, hard to detect, including semi-submersible missile barges or fully submersible missile toting large autonomous vessels, or something else that mad scientists can create . . . 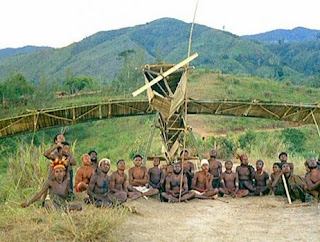 I support some form of the carrier Navy, but I simply don't think it's wise to suggest that creating a number of smaller carriers while hoping to increase the range of their main weapon system - the aircraft they carry - does much more than kick the problem down the road. If ship killer missiles can range to 2000 miles, why not to 3000? 4000? 5000? What kind of range will future carrier aircraft need to avoid the threat?

The effort to suggest that this "fix" or that other "fix" for carriers and their air wings will restore things to the point they were 20 years ago seems as wrong headed as the South Sea Island "cargo cults" that grew up after WWII. The thinking seems to be that if exactly the right words are spoken and the rituals observed, the magic will happen and the carrier will be "king" again.