China As Bully: New Maritime "Law" Threatens War With Neighbors (and the U.S.)

China's new maritime "law" is another example of China attempts to cow its neighbors into submission to its rules that counter the existing international rule. And the neigbors are aware of this, as set up in the The Japan Times report Japan braces for moves in East China Sea after China Coast Guard law: 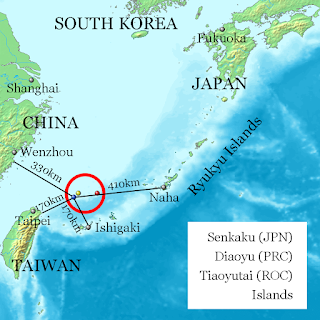 Japan is has expressed alarm over China’s new law that allows the China Coast Guard to use force against foreign parties for what Beijing views as violations of its sovereignty and jurisdiction.

The new law, which entered into force Monday, “could shake the order based on international law,” a Defense Ministry executive warns.

Tokyo is braced for possible Chinese military actions in the East China Sea, where tensions are running high over the Japanese-administered Senkaku Islands, claimed by Beijing.

Some in the ruling Liberal Democratic Party say that the Self-Defense Forces should play a bigger role in dealing with the situation.

Beijing put the coast guard under the command of the Communist Party of China’s Central Military Commission, the top leadership body for the country’s military, in 2018.

The new law allows the coast guard to take all necessary measures, including the use of weapons, against foreign organizations or individuals that violate Chinese sovereignty or jurisdiction.

By contrast, the Japan Coast Guard is bound by strict restrictions on the use of weapons under the law, which clearly bans it from military activities.

Coast guard ships from China have repeatedly intruded into Japanese waters around the Senkaku Islands.

Last year, Japan spotted Chinese coast guard and other government vessels inside the contiguous zone surrounding the territorial waters around the islets on 333 seperate days, a record number.

At an LDP meeting last week, lawmakers attacked the new Chinese law. One warned, “China is taking aim at the Senkaku Islands,” while another said, “China’s move is nothing less than a threat.”

Yes, this is how wars get started - overreaching by a neighborhood bully who feels slighted by what happened in the past. China's "100 years of humiliation" ended some time ago, but apparently it allows the CCP dictatorship all the excuse it needs to attle sabers.

Couple this with the latest aggresson in the air in Taiwan airspace, China is feeling out the new U.S. leadership. I hope they find that it has a spine.

UPDATE: And in the Philippines:

The Philippines has protested a new Chinese law that authorizes its coast guard to fire on foreign vessels and destroy other countries’ structures on islands it claims, Manila’s top diplomat said Wednesday.

Foreign Secretary Teodoro Locsin Jr. said in a tweet that the new Chinese law “is a verbal threat of war to any country that defies” it. Failure to challenge the law “is submission to it,” he said.

“While enacting law is a sovereign prerogative, this one — given the area involved, or for that matter the open South China Sea — is a verbal threat of war to any country that defies the law,” Locsin said.

Email ThisBlogThis!Share to TwitterShare to FacebookShare to Pinterest
Labels: Fun with China, How Wars Get Started, Japan, Philippines