The Republic of Singapore Navy kills a threat:

On 29 Jan 2021, a small underwater explosion occurred in the waters off our Southern Islands. It was barely noticeable, but it was a remarkable event.

The underwater explosion signified a successful neutralisation of an underwater threat by an unmanned surface vessel (USV) - a first in the world.

"It was exciting and satisfying to execute the deployment of a K-STER expendable mine disposal system (EMDS) against an underwater threat. After more than three years of development, and numerous rounds of planning and checks, we finally managed to achieve the successful launch and firing of an EMDS from an USV – a breakthrough in the deployment of USVs!" MAJ Lim Yoong Seet, Head of Readiness and Resource Section, 6 Flotilla shared.

Much more at Naval News here. 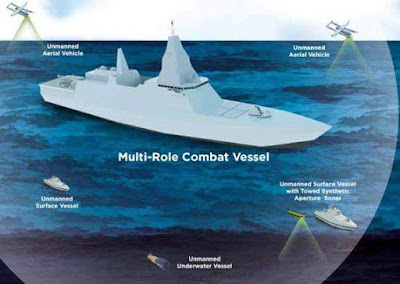 The replacement of the RSN's Victory-class Missile Corvettes with the Multi-Role Combat Vessels (MRCVs) is proceeding as planned, with six MRCVs expected to be delivered by 2030. The MRCV employs key technologies such as configurable modular payloads and unmanned systems, allowing the vessel to function as a "mothership" for unmanned drones and vessels to conduct a range of missions from peace to war.