Midrats on Spreaker - Episode 582: The Future of European Naval Power with Jeremy Stöhs 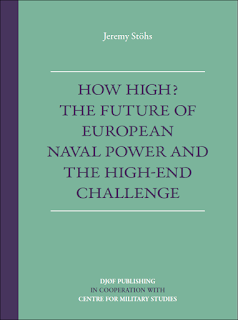 Pre-recorded for your listening pleasure, Midrats Episode 582: The Future of European Naval Power with Jeremy Stöhs

Where is European naval power in 2021, what is shaping it, and where is it going?This week returning guest Jeremy Stöhs is with us to review the above issues as outlined in an exceptional report he produced for the Centre for Military Studies at the University of Copenhagen., "How High? The Future of European Naval Power and the High-End Challenge."Jeremy is the Deputy Director of the Austrian Center for Intelligence, Propaganda and Security Studies and the editor for their journal, JIPSS.After service in the Austrian Federal Police in 2005-2010, he studied History and English/American Studies at the Universities of Graz, St. Petersburg (USA) and Marburg (GER) 2009-2015. He was a Defense Analyst at the Institute for Security Policy at Kiel University (ISPK) 2016-2019 and received his PhD in political sciences from Christian-Albrechts University Kiel, 2019. He is the author of "The Decline of European Naval Forces: Challenges to Sea Power in an Age of Fiscal Austerity and Political Uncertainty” (US Naval Institute Press, 2018).His research focuses on International Relations, Strategic Studies, U.S. and European Security and Defense Policy, Maritime Strategy and Security, Public Security.

Listen to "Episode 582: The Future of European Naval Power with Jeremy Stöhs" on Spreaker.

If you use Apple Podcasts, you can pick up this episode and others and add Midrats to your podcast list simply by going to here. Or on Spreaker. Or on Spotify.

You can download the publication How High? The Future of European Naval Power and the High-End Challenge here.